Skaters go through plenty of pairs of shoes, but some always stand out among the rest. We talked to Theotis about his current favorite pair of SBs, his all-time dream pair, and how many closets he needs for his collection. 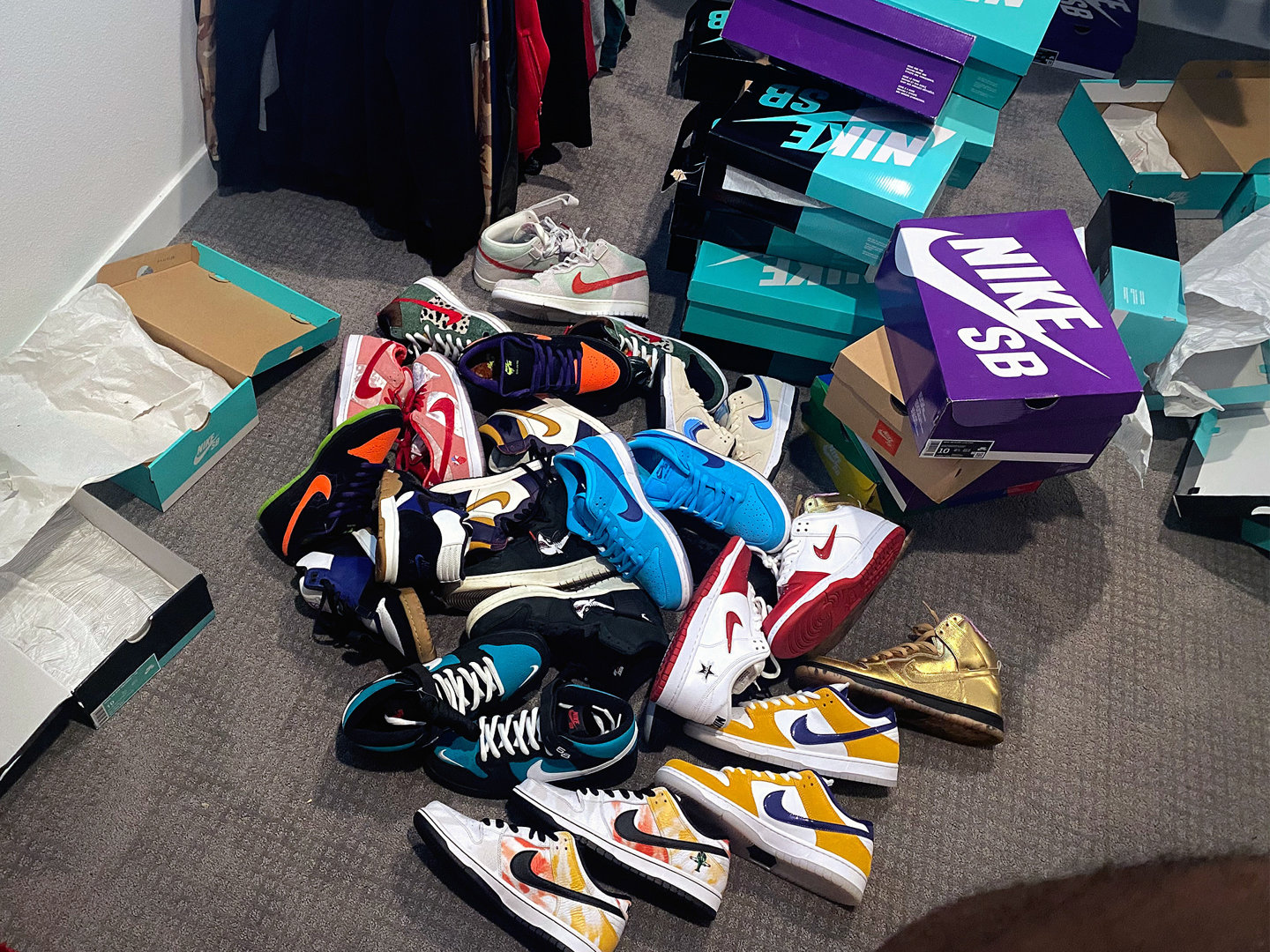 Theotis Beasley: Chillin’, playing it safe at home, popping out to skate here and there. I’m not going crazy or anything, but skating by yourself is kinda boring. You do like three flatground tricks and then you’re back in the house, back on the couch! How you doing?

TB: That GDP Dunk. People are going crazy for it. Obviously super limited. Todd (Bratrud) is a legend, man. Love all of his 420 Dunks, but this one...

TB: One of my favorite colors is purple, so that’s a good start. And I loved the one he did a while back that was the reverse, where it was mainly green (ed. The Skunk Dunk) but I didn’t get a chance to get those. But these ones are really dope because they put the numbers on the side so it’s like, you get whatever number out of 420. Like if you got number 1, that’s crazy.

SB: What number did you get?

SB: 202 is tight though! Very symmetrical. 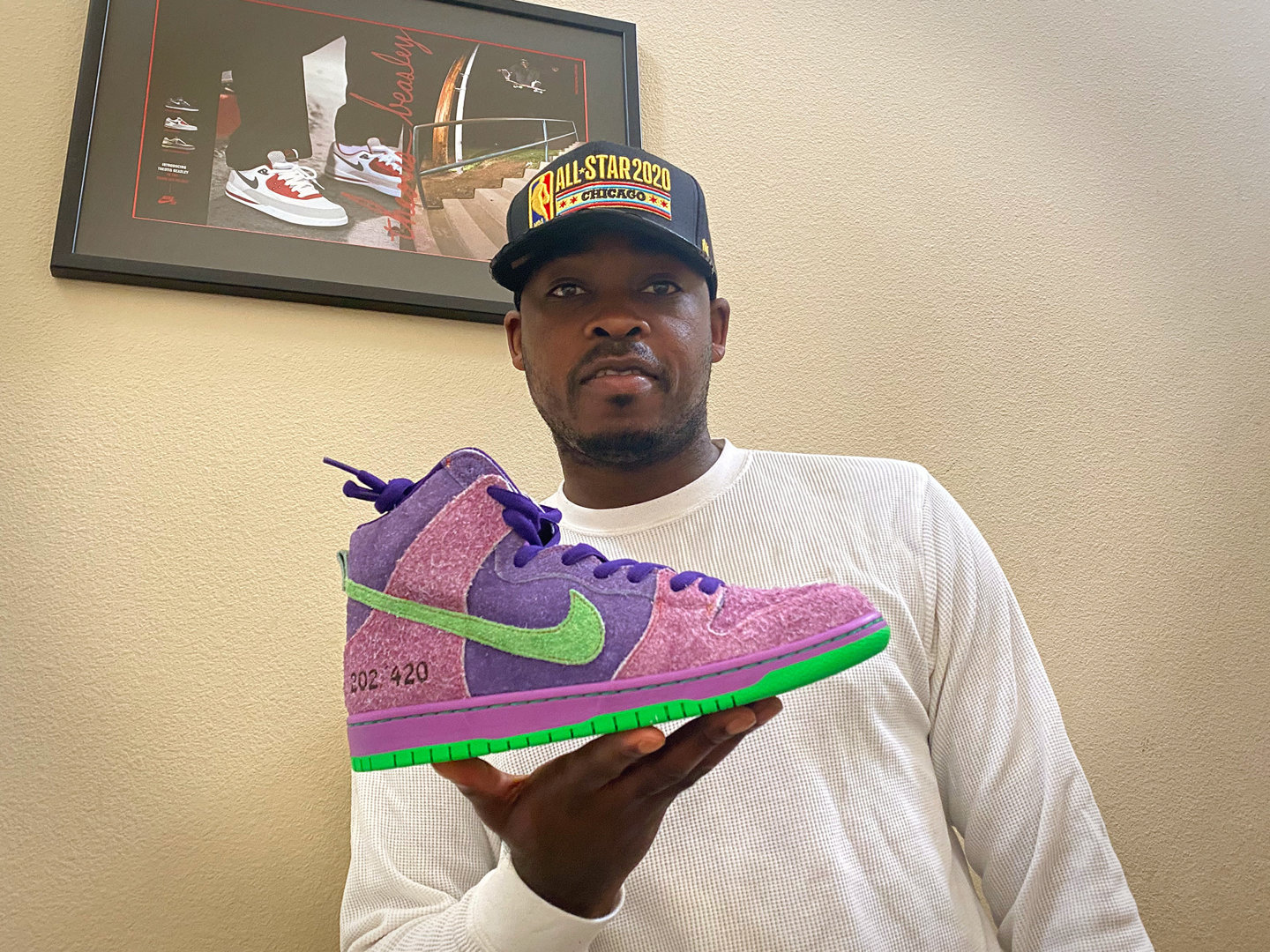 I saw the shoes early and I hit up Nike and they were like, “Nah, we can’t get you those.” So I was thinking about just buying them, because I heard they were ten times as exclusive as the Travis Scotts. But then they hit me back a couple hours later and said, “You got some coming!” I was hype.

TB: You know what? Eventually I will. Yeah. I don’t collect shoes. If I get some Jordans I’m not gonna skate those, so I try to take care of them. But SBs...eventually I’m gonna wear them. Some people put them up, no dust or nothing, but I’ve never been too crazy about that.

SB: You gotta rock them, you can’t just have them sitting in your closet.

TB: Yeah! Otherwise, what’s the purpose. You got these dope shoes, even if they’re rare...I gotta get them out in the world, put some heat under people’s asses. If they don’t got ‘em they’re gonna be trying to snap ‘em. I’m setting it on fire with this heat I got coming! When I step out the whip it’s all flames. I don’t think they’re ready.

SB: Most definitely not. So these ones are fresh. How about a pair from the past that you didn’t get?

TB: Oooh, I got three. It’s always been:

And my ultimate, all-time, number one is the Yellow Lobsters. There’s something about those, I might have to save those if I got a pair, definitely my favorite. 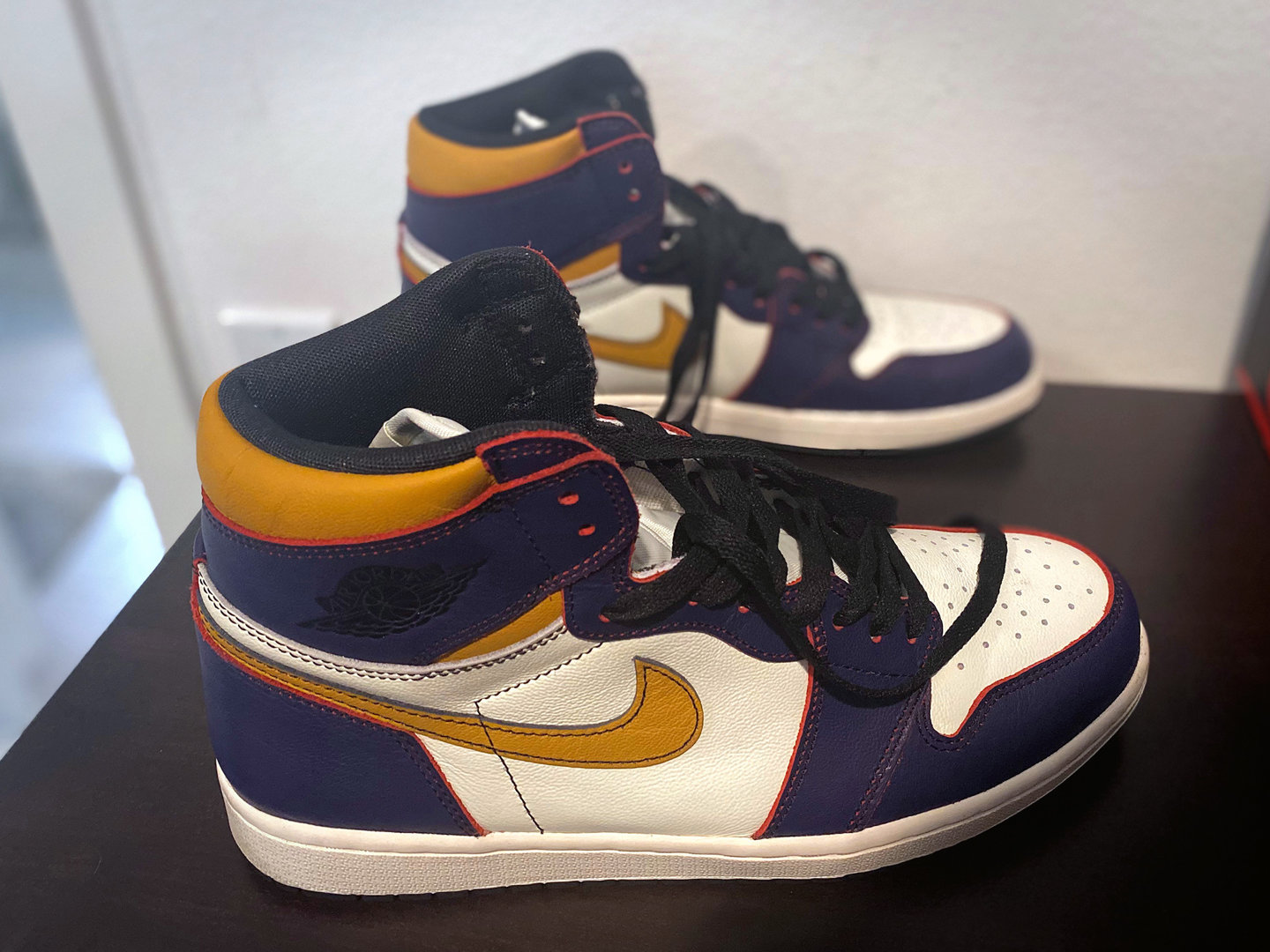 SB: So if somebody said, “Ok, I’ll swap you right now, GDP Dunks for Yellow Lobster,” would you do it?

TB: Oh yeah! One thousand...you can have them, come pick them up today. I’m not even lying. I like those Yellow Lobsters so much. I can’t really say why, just the whole yellow vibe. The other Lobster Dunks are cool too, but the yellows...man. It’s just fire, it’s too tight.

SB: On that tip, has anybody ever offered you anything crazy for the shoes off your feet when you’re out skating some wild SBs?

TB: It’s crazy, because kids will be freaking out when they see me post a clip in them. I’ve never been offered anything for the shoes, but the kids will freak out. I was skating in those Raygun Dunks and people were tripping out on those. I’m like, bruh, you coulda bought a pair! Or the Frog Blazers, I’d be at a spot and kids would be like, “Yo, why are you skating those?” And I’d just say, “Bro, if you don’t back up! These are just skate shoes, dog!”

SB: I can only imagine! Do you have any SBs that you’ve saved?

Man, there was so much heat back in the day. I went from a size 9.5 to a size 10 after I got toe surgery, though, so I gave away a lot of my old pairs. I don’t have any of that old school heat anymore. I was talking to my boy Uriel about it. I gave him a bunch of my old shoes that were still in mint condition. We just had some heat back then. But no more! Long gone!

Back in the day though. Coral Snake, Space Tiger, Appetite For Destruction. So many good ones.

SB: You were saying earlier that you’ll set aside Jordans and keep them pristine. How many pairs of Js do you have?

TB: Man I had so many in 9.5 that just wasn’t working with my toe, so I had to get rid of all of them. I used to have so many shoes. Each bedroom I used to have shoes in the closet. Now I only have ‘em in my closet. So I cleaned all of ‘em out of the other two.

TB: Yeah that’s decent, but I used to have some heat! When I changed sizes I probably gave Uriel like 120 pairs, not even gonna front. But I’d rather hook up a homie than sell ‘em so…

But it’s summertime. There’s more drip coming, so I’m about to really cut up.

SB: You’re gonna have to open up those closets again?

TB: Oh yeah, each closet is gonna have some shoes on the shelf soon. So if I’m downstairs, I don’t have to run upstairs, just grab some down there. Whatever room I’m in, whatever I’m feeling. The closet ‘bout to be right. It’s gonna look like Niketown.

SB: Who else on SB’s got the sickest collection?

TB: Off the top of my head? I’ll say P-Rod and Koston. Koston I know is a big shoe collector even outside of skateboarding, so I’m curious. I went to Paul’s house a few times and his lady’s got them all set up in boxes on the shelf. It’s like heaven, it’s all organized. It’s just right. Almost made me want to do my crib like that!

SB: What do you wanna see SB do next?

TB: Man, that’s a good question. Obviously they’re killing it with those Jordan 1s they did with LA to Chicago, and that GTS that was almost like an AirMax 1. I got the red pair. Those are fire.

But as far as stuff they haven’t done... People are big fans of the Jordan 11s and 12s, that would be tight to see something in that shape. Those are some of my favorite Jordans outside of the 1s.

The GDP dunk inverts the colors of the original Skunk Dunk with a hairy suede, two-toned purple upper and green spark on the Swoosh and heel tab. 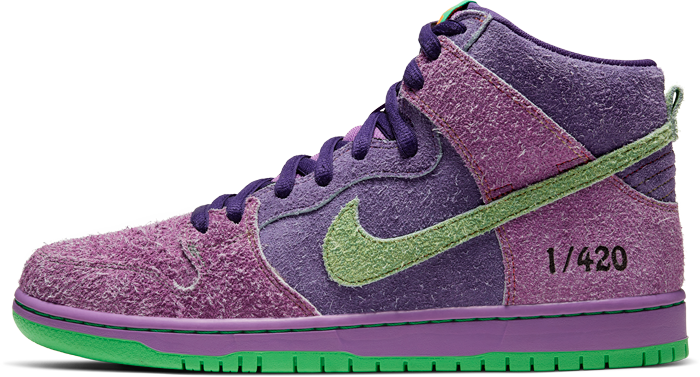 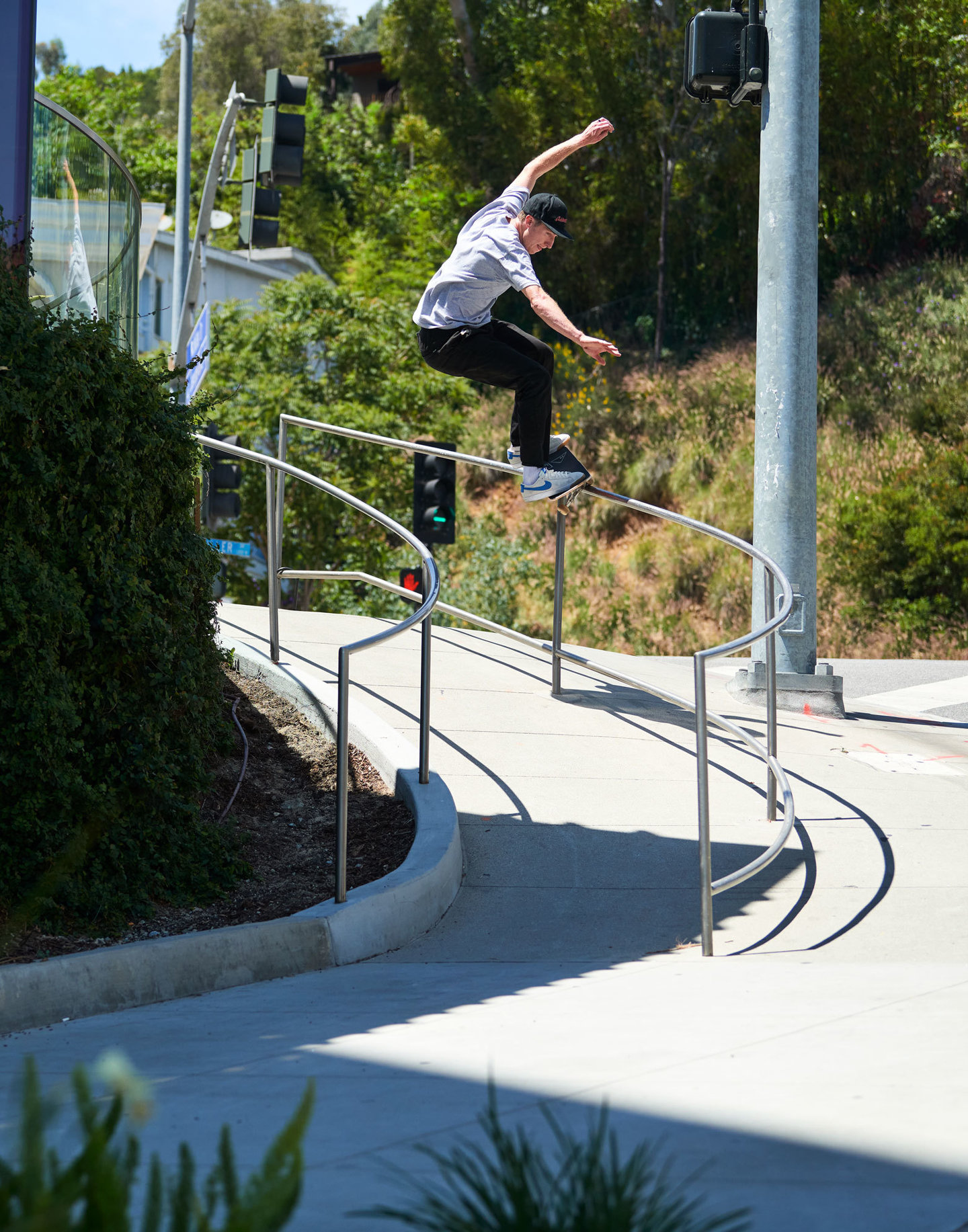 We caught up with him recently and talked about the new Pro version of his signature GT Blazer, his daughter skating with her grandpa and why he just might have to buy an El Camino. 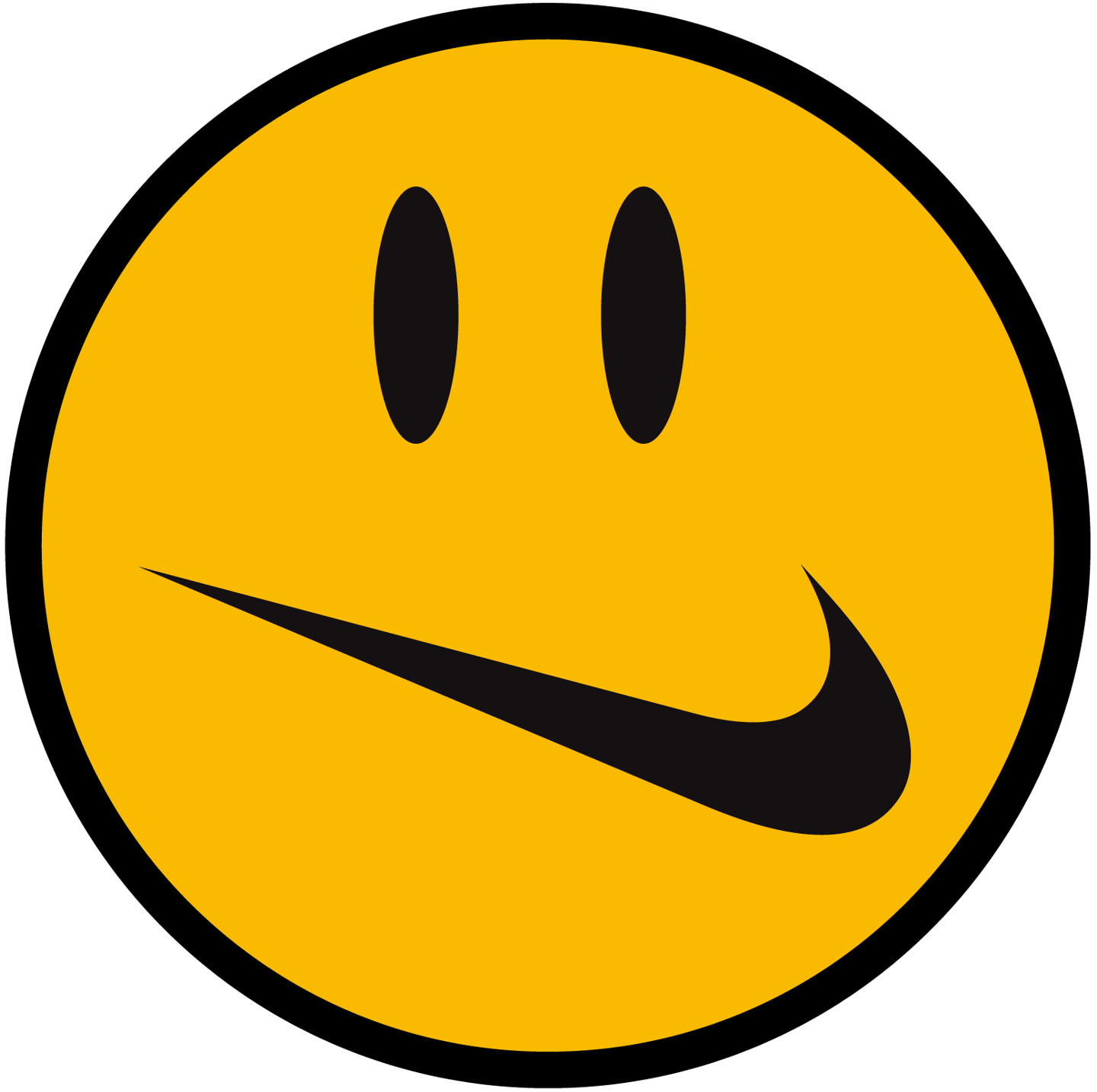