Loud, proud, colorful, and full of energy, respectfully. That’s froSkate, a Women and POC–centered skate crew based in Chicago, founded by Karlie Thornton in 2019. In just three years froSkate’s not only grown exponentially but become a global example of empowerment in skateboarding through inclusion, positivity, and being unabashedly real.

For their first collaboration with Nike SB, froSkate designed a Nike Dunk Pro High SB that reflects their diversity, style, heritage, and personality, using every inch of the classic silhouette as a platform for their mission statement and swag.

We caught up with founder Karlie Thornton and Lauren “L Brew” Brew to learn about their journey in skateboarding, founding froSkate, and turning their collective creative into a video and shoe that reflects the soul of froSkate and the community they serve in Chicago and beyond. 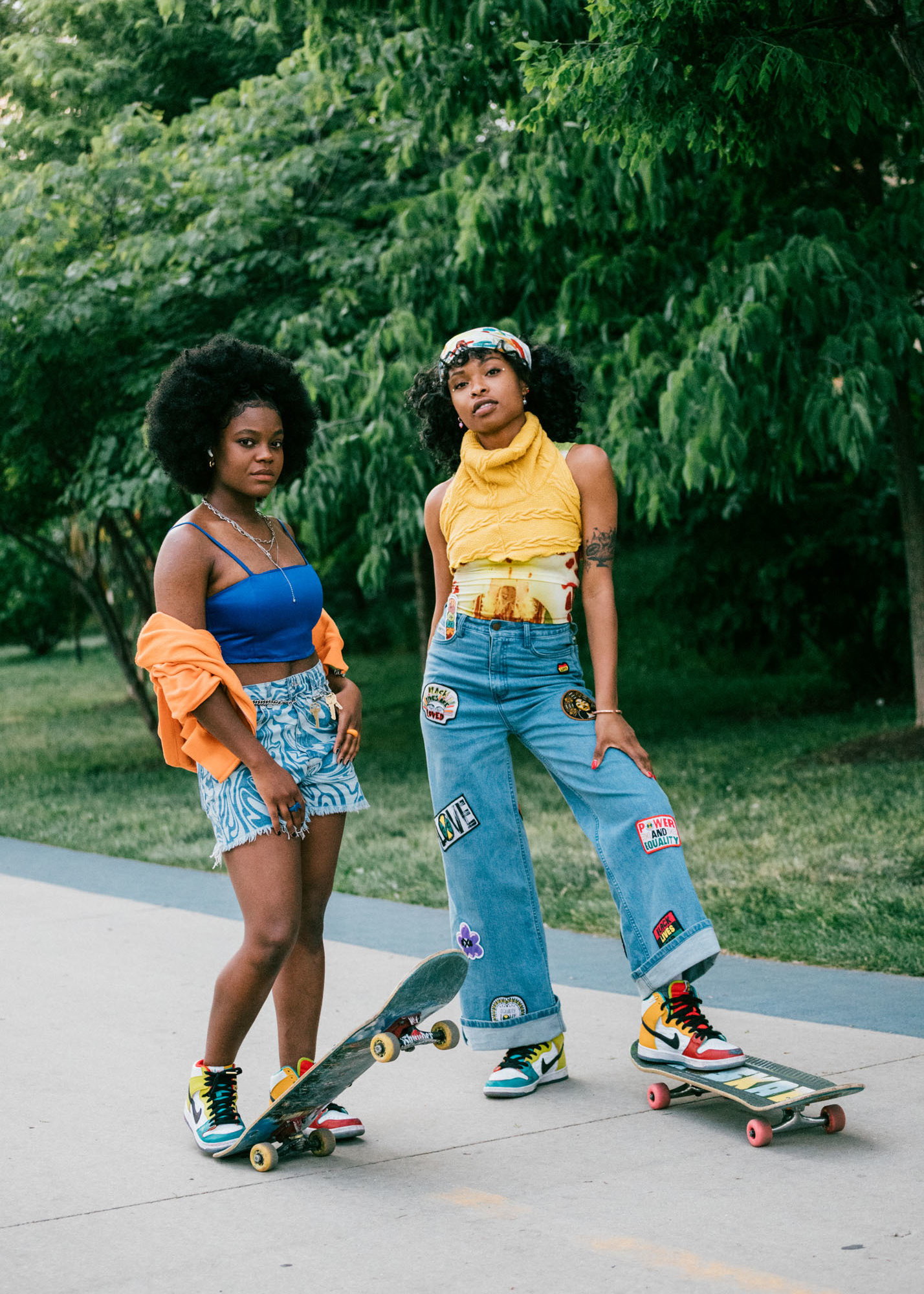 What inspired you to start froSkate?

I started froSkate in 2019. It all happened really fast, we didn’t have a business plan, a mission statement, or even a goal. It really was just me and some friends wanting to learn how to skate with people who look like us. We felt lonely at skate parks or in moments when we were skating in larger groups. We just wanted to see more people who looked like us skating and that includes black and brown folks of the BIPOC community that includes more women, more queer folks, and more trans folks. We would invite friends out, we started a group chat and it got really big. I took the liberty to start an Instagram page and started posting meet-up flyers and it caught a lot of attention. It got big really quickly and that showed me there was a true need for this (froSkate) in the community. Chicago hadn’t had anything like it before.

We throw the word community around a lot and it’s really embedded in a lot of our experiences as BIPOC Queer skaters meant that we grew up skating alone. We weren't really able to have that cohesive engagement of a skate crew that a lot of traditional skaters had or grew up having. We didn't really have role models who looked like us to look up to, we didn't really see that in the media and skating at the time. A huge part of our mission, not only is to give this community to this intersection of folks who haven't always had it but also to increase the representation of us in skateboarding so that the younger generation can see us—to have that inspiration and grow up with. We've had to play a little bit of catch-up since we didn't get to start skating when we were five with a bunch of other people or anything. We're just giving it to ourselves now. 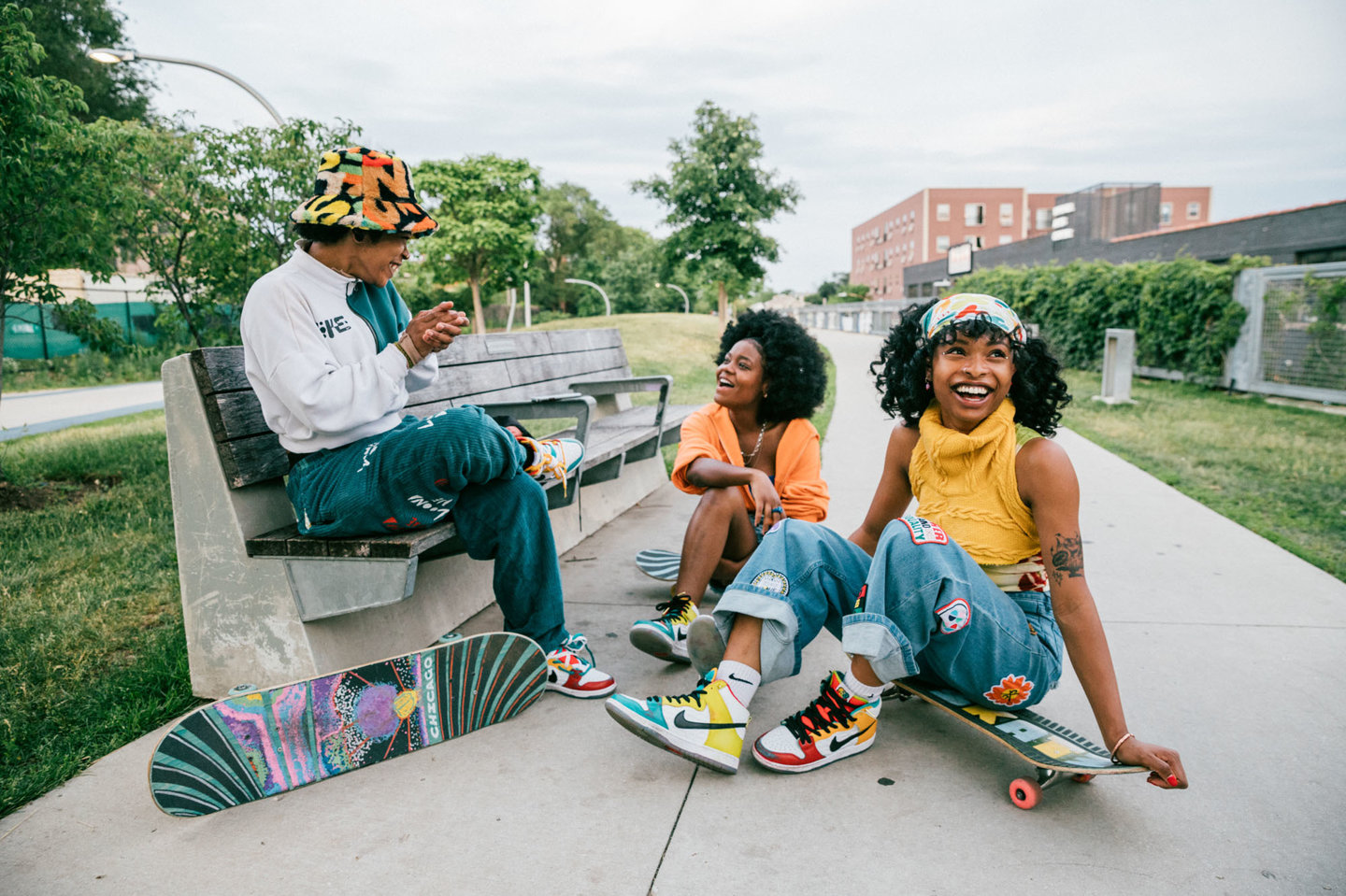 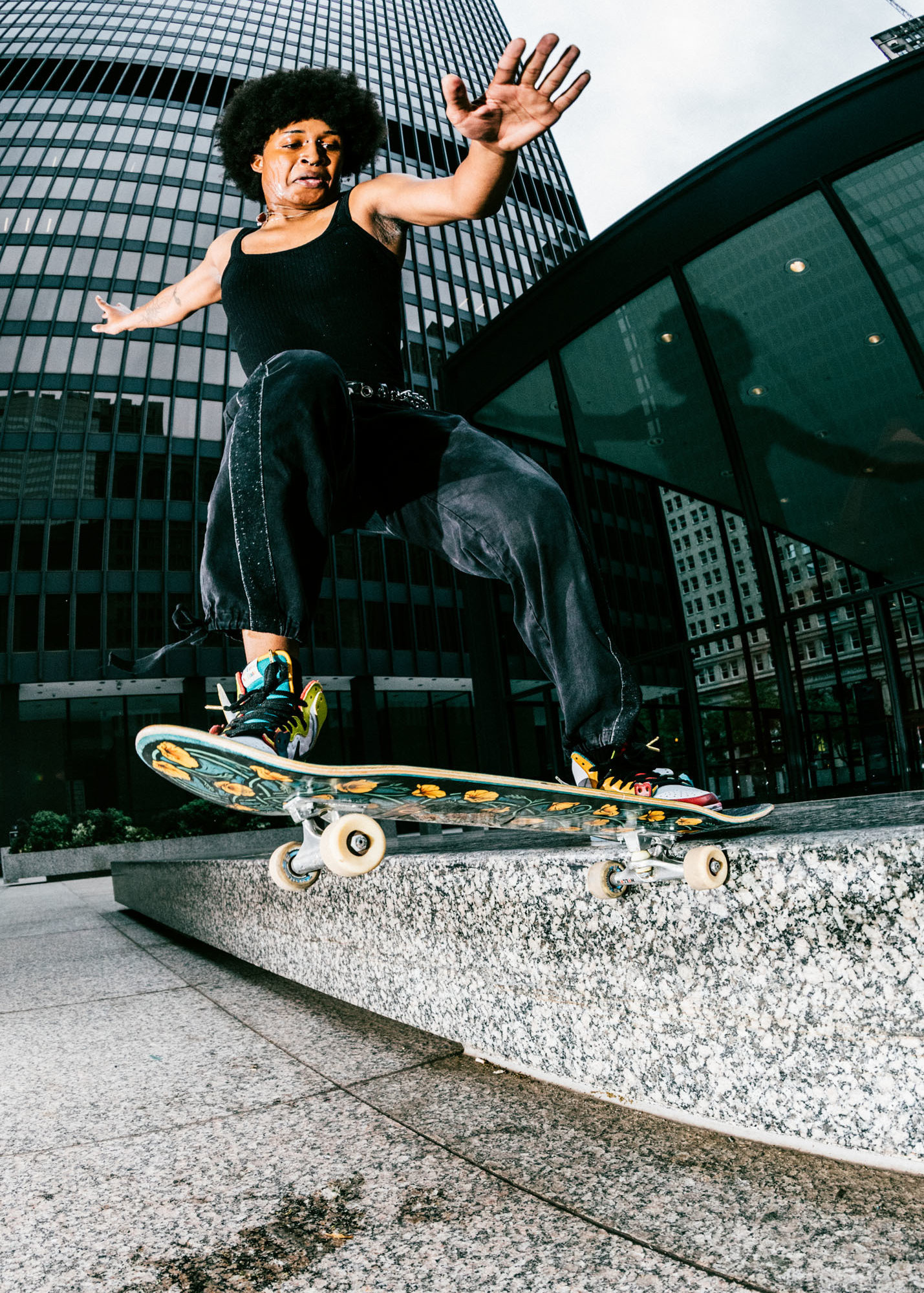 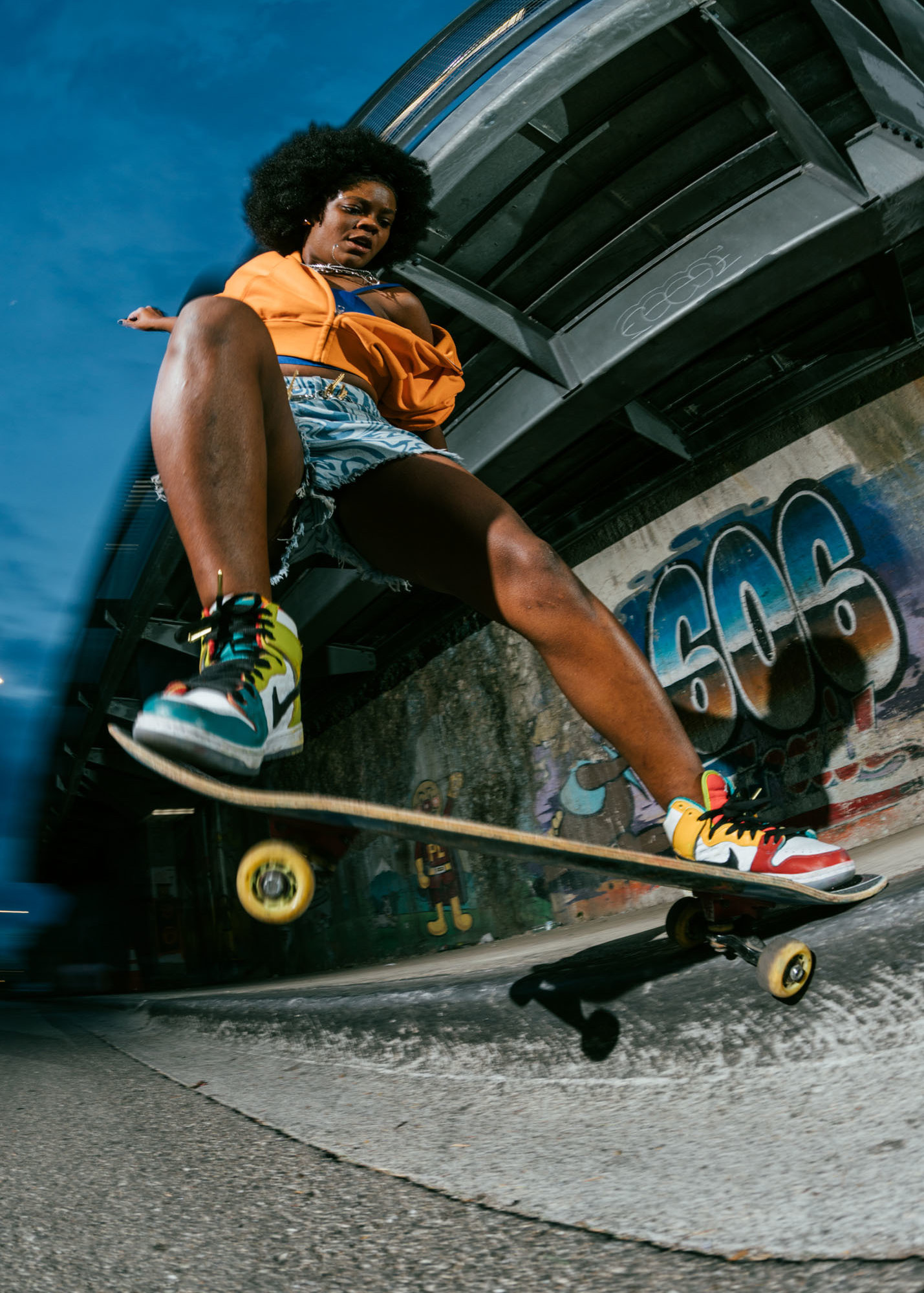 As skateboarding grows and becomes more popular, one of the biggest growing pains seems to be skatepark etiquette. What’s your experience been and how can everyone work together to make those shared spaces more welcoming and safe?

L Brew: One thing we’ve always asked of locals and more seasoned skaters is to help welcome folks of our community into the park. Something as simple as a head nod or introduction goes a long way for those who might feel nervous or intimidated when entering the park. It’s incredibly comforting and helpful to be acknowledged and accepted at first sight.

Karlie: I always hear from everyone, ‘Skateboarding has always been inclusive. It really does not matter what color or identity you are. What matters is you and your board at the end of the day,’ but I now we have such a larger influx of like women and queer and trans and nonbinary people skating than we've ever had. That's definitely going to have to come with some new etiquette on how to treat these people that are entering the skateparks. For them, they're already intimidated. It doesn’t matter if you’ve nodded to them or not. Everyone who has already been at the park needs to do a little extra work to make people more comfortable. I like to call that allyship and that does include saying what’s up, inviting people over, and maybe offering consensual advice or help with things—emphasis on word consensual!

Thanks for calling that out. People think they’re being helpful but when offer advice without asking, especially when you say “All you need to do is this…” it can be off-putting or intimidating.

Karlie: People definitely love to give girls unsolicited skate advice. I would say don't just run out and be like, ‘Hey, do this!’ Welcome people to the park and if they feel comfortable and want help, they’ll ask. I've had some positive interactions at the skatepark with people being welcoming. The seasoned skaters tend to be more respectful, we’ve had more issues with the younger generation of skaters being more disrespectful to queer, trans, and non-binary skaters.

There’s a really infectious energy to the video you created for the froSkate Dunk, can you take us through the creative process and inspiration for it?

Karlie: For a long time, I had a completely different idea that would have involved doing a whole tour, going to different states, and all this extra stuff but then I randomly had the idea of what the video became. I was thinking more about how froSkate tries to easily speak to our community through skateboarding and also, what our culture loves and enjoys—the BIPOC culture—and that’s haircare. Style, swag… that’s so intertwined in BIPOC culture as the leaders of all things cool. We want froSkate to be specific to BIPOC culture and want to help serve them. For example, we’ve made satin-lined beanies. We wanted the film to incorporate those two worlds and I thought about beauty supply stores and skate shops—merging these two worlds that are so crucial to black and brown people. The beauty supply store is a place where the majority of black and brown American people have needed to step foot in to get whatever they need, whether it be hair materials like scarves, shampoos, combs, even clothes, shoes, lighters—it’s your one-stop shop for whatever it is that you need. Oftentimes, they're not black-owned so it was really important to highlight a black-owned beauty supply store in Chicago.

Then also you have the skate shop, which is your staple place to get everything that you need for skateboarding: your board, your wheels, your trucks, your clothes, your shoes. These two worlds are intertwined in our communities in general. We wanted to tell the tale of those two worlds and bring some fun and glamour and fam identity a little bit to our campaign and to Nike in general as the first black-female collaboration with SB.

L Brew: We’re blending Black femme & Queer culture with skateboarding in a way that’s never been done before, and paying homage to our people throughout it all. Representation-wise, I feel this is going to be incredibly groundbreaking and huge. You don't really step foot into beauty supply unless you're like a black person or brown person and that's just like such an integral part of who we are and our life growing up. To be able to showcase that in a Nike SB video is going to be sick. We definitely want people to be able to see something they've never seen before.

Karlie: And see themselves in it. 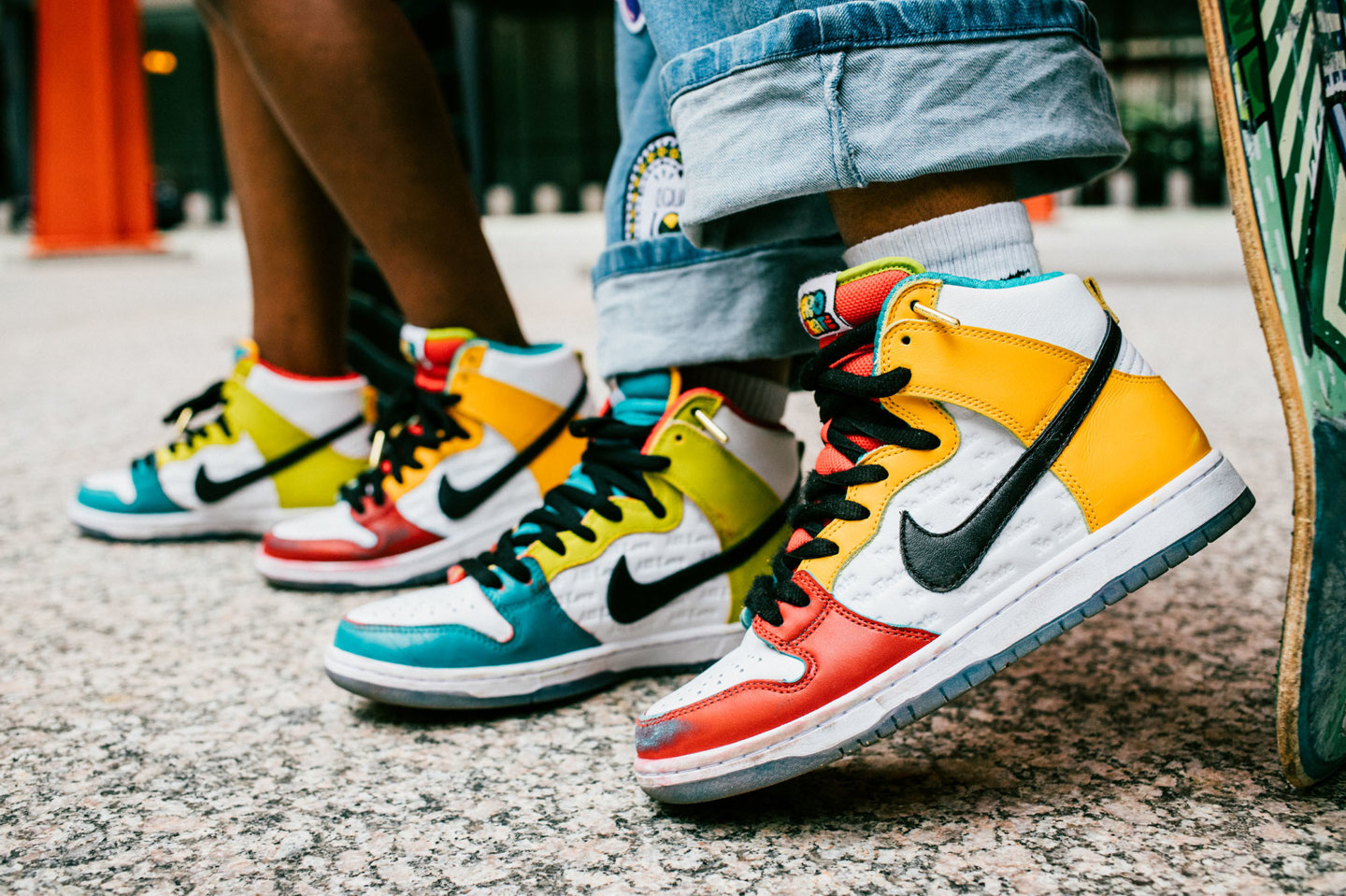 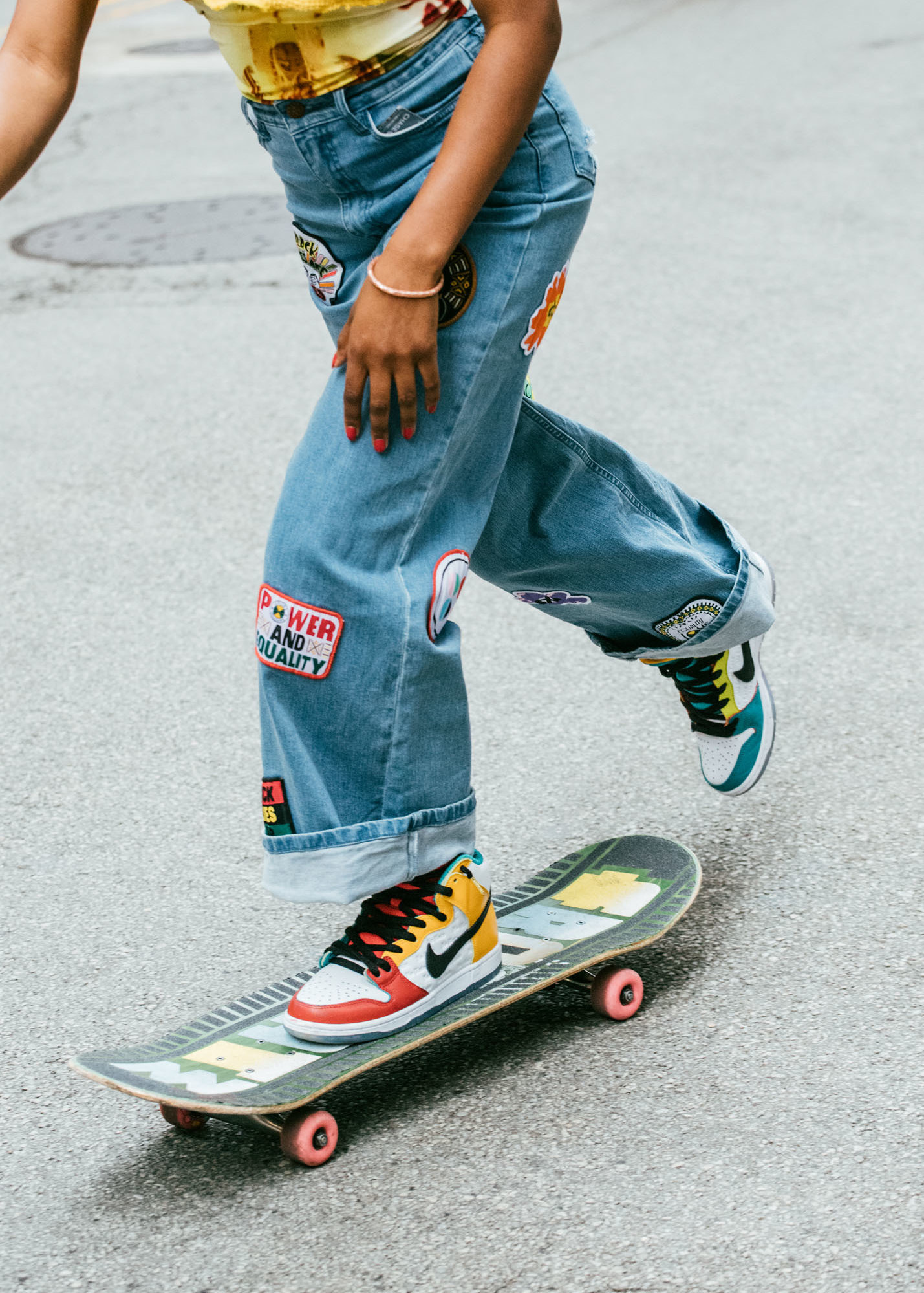 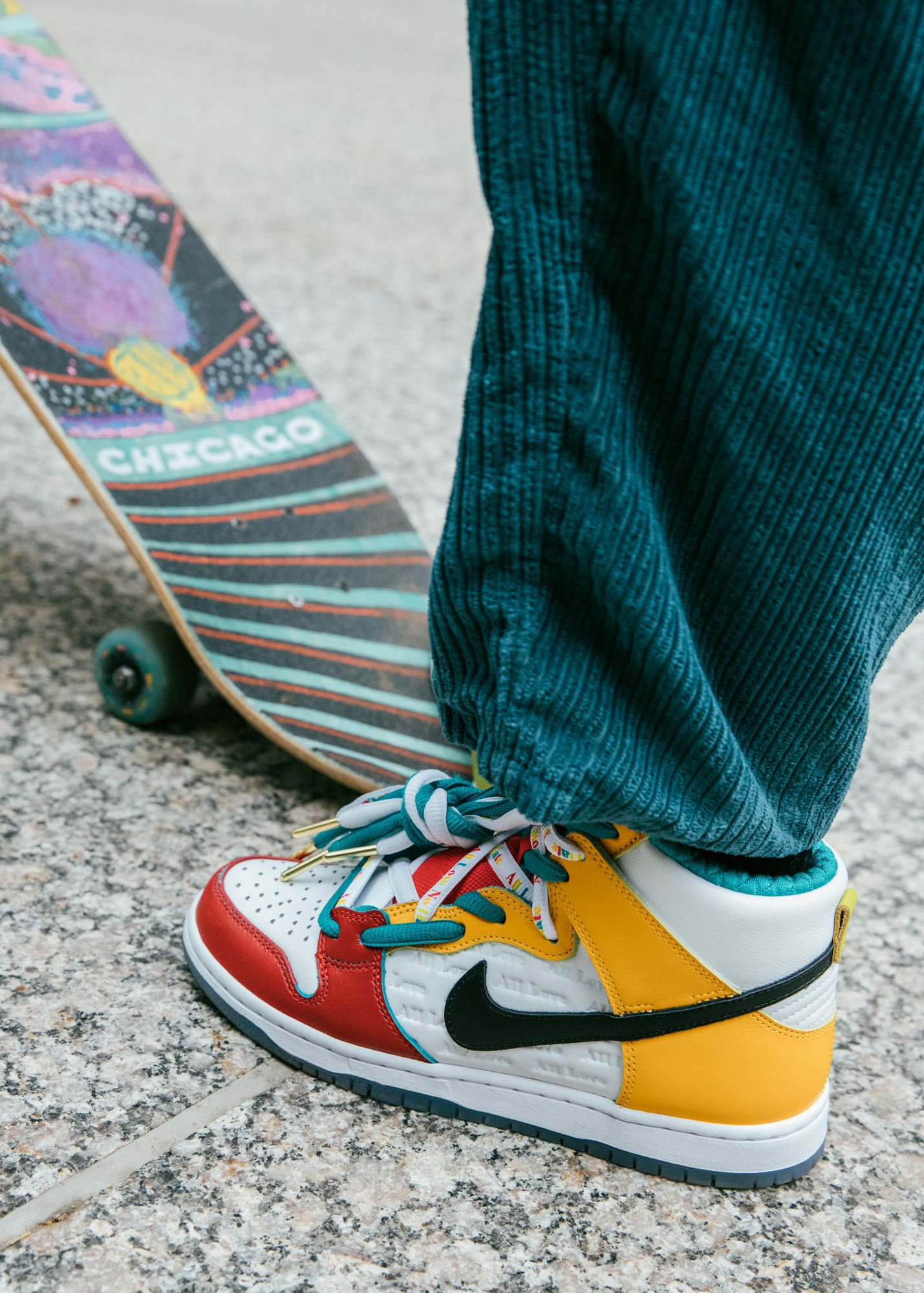 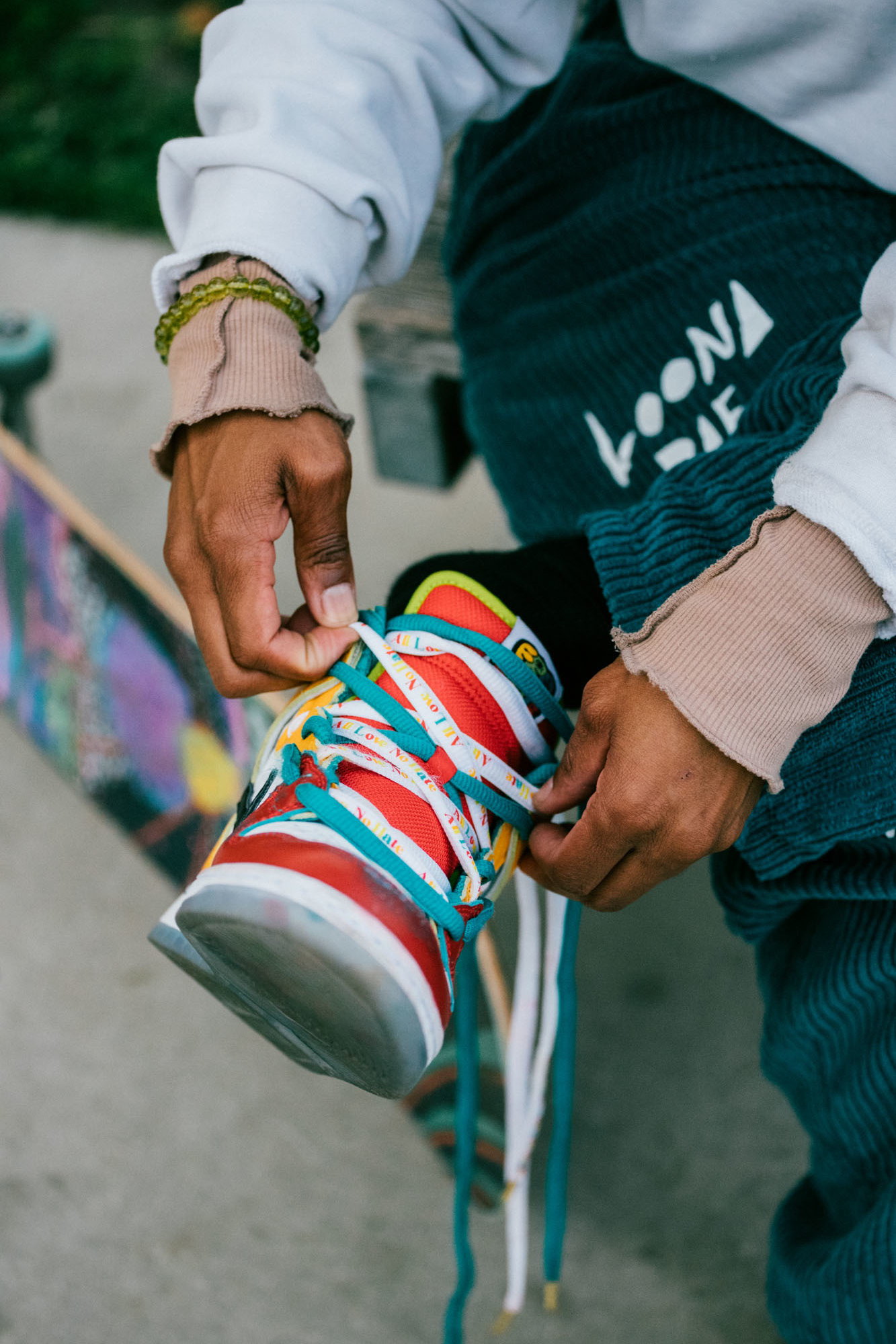 How do the themes in the video and froSkate in general tie into the shoe’s design?

L Brew: There are a lot of aspects in the shoe that tie back to different things in various ways. We very much feel that froSkate is very bright, vibrant, and joyful—the energy is very excitable. We wanted to use colors that really stand out like every single one of us do. The creative aspect of skateboarding was super huge for the shoe. Karlie and I talk a lot about how pretty much everyone we know in skating is an artist or creative in some way. We brought that into the shoe with the rub-off panels. The bright-colored panels actually rub off and reveal the color of the opposite shoe as you skate them. We brought in that do-it-yourself aspect—no two shoes will ever look the same once you skate in them. The way you skate, the way you flick, it’s going to leave different color streaks on your grip tape. It’s really individual.

Karlie: It was also important to us to ensure it was inclusive for all levels of skateboarding and de-stigmatizing what a “real skater” looks like. When we first heard that we were having a collaboration with Nike SB we just knew that we had to bring representation to not only who is featured in our campaign and the shoe, but also in skating. I've never seen representation of beginner skaters on Nike SB's channel and rare to see in general in skate media. It's always the most advanced and crazy skating you've ever seen. I mean that is what Nike is about, “The best of the best,” which is respectable and great to look up to, but often discouraging for people who are just getting started or not interested in being the world's best pro skater and just skate because it's fun. Oftentimes people are even frightened to even think about starting to skate and even to join froSkate because they are scared and embarrassed by their skating ability. We wanted to show everyone that it doesn't matter where you are in your skating journey, one week in, or 20 years in, you are a skater, you matter, you are not a poser. Skating is just about having fun and doing with it whatever you want to do. It's about finding and honoring your own journey.

I've personally been attacked over the years in-person and online from one to even mobs of people because I'm a girl holding a skateboard, they assume I “cant skate” and when they see I can't kickflip they want to discredit my entire being. I've been told we don't deserve to have a shoe because we aren't “real skaters,” when in reality I've honestly done more for skateboarding as a beginner than a person who has a full bag of tricks, that's just not what skateboarding is about. One of my mentors, Don (Coach) Cooley (DGK Team manager) is always telling me, ‘It's not about tricks, it's about the impact you are having on your community and skateboarding, it's about giving back and bringing people in.” We want to de-stigmatize that “poser” thinking and show everyone they are valid in their own journey and I'm so grateful we get to be the first with Nike to help continue that conversation through this shoe.

We will go through the pain and the hate now to help the world respect all levels with love. In our video you see skating of all levels represented and from a diverse crew of all gender identities, races and ages. You see cheering and love for small to large feats and falls. That is what skateboarding is about. 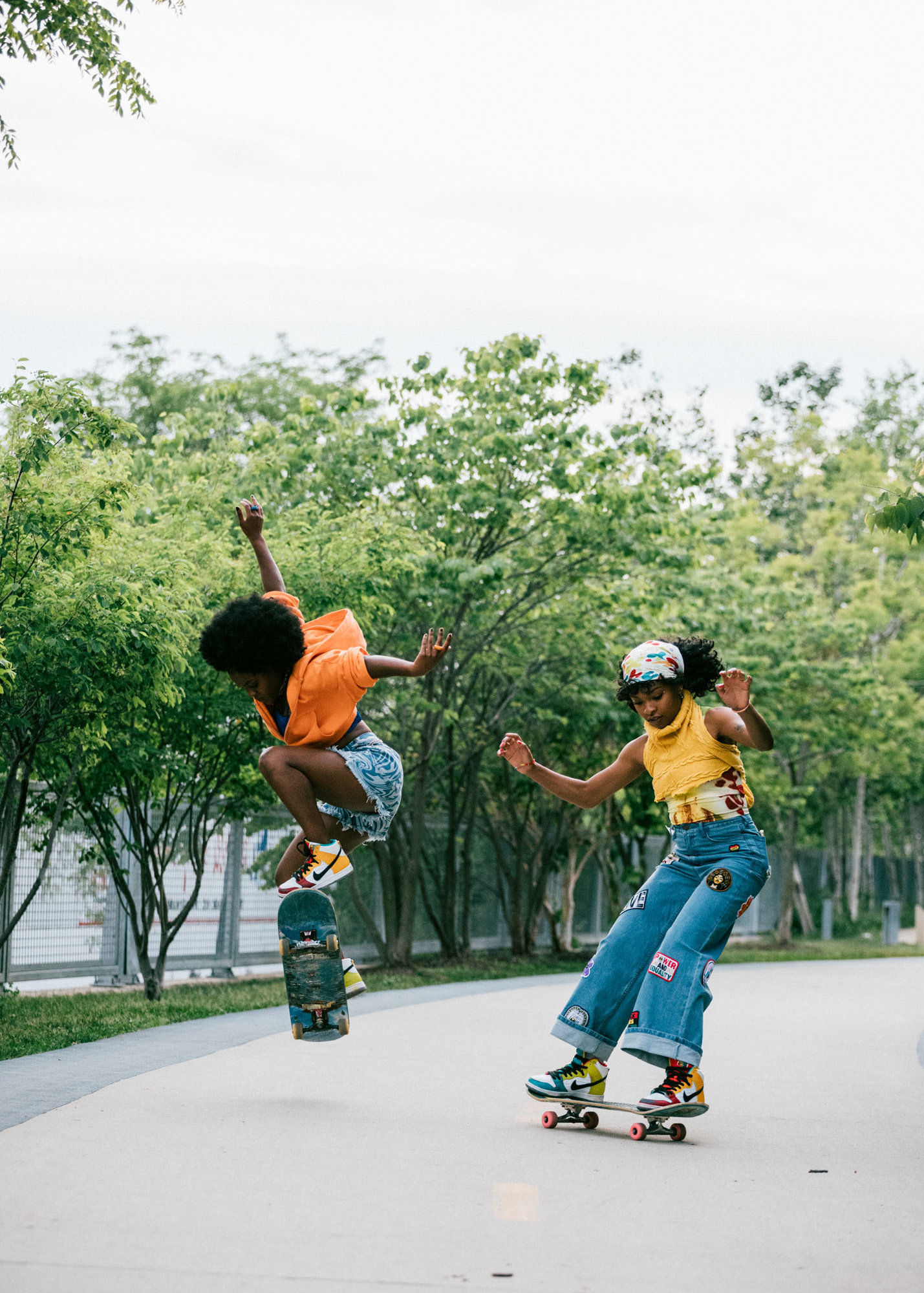 froSkate | All Love, No Hate

Loud, proud, colorful, and full of energy, respectfully. That’s froSkate, a Women and POC–centered skate crew based in Chicago founded by Karlie Thornton in 2019. In just three years froSkate’s not only grown exponentially but become a global example of empowerment in skateboarding through inclusion, positivity, and being unabashedly real. 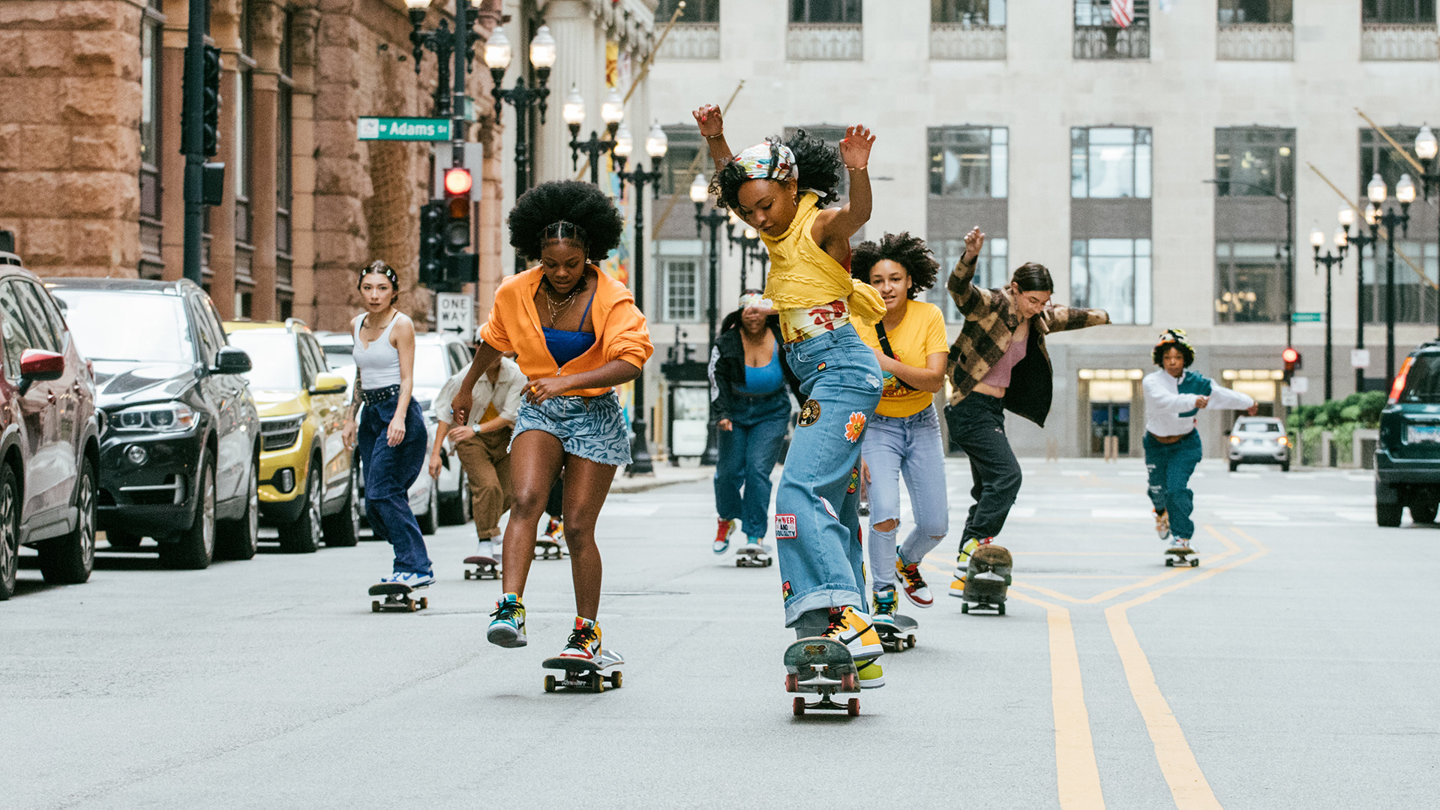 The SB Dunk High by froSkate is available August 13 in select skate shops and August 17 in SNKRS. 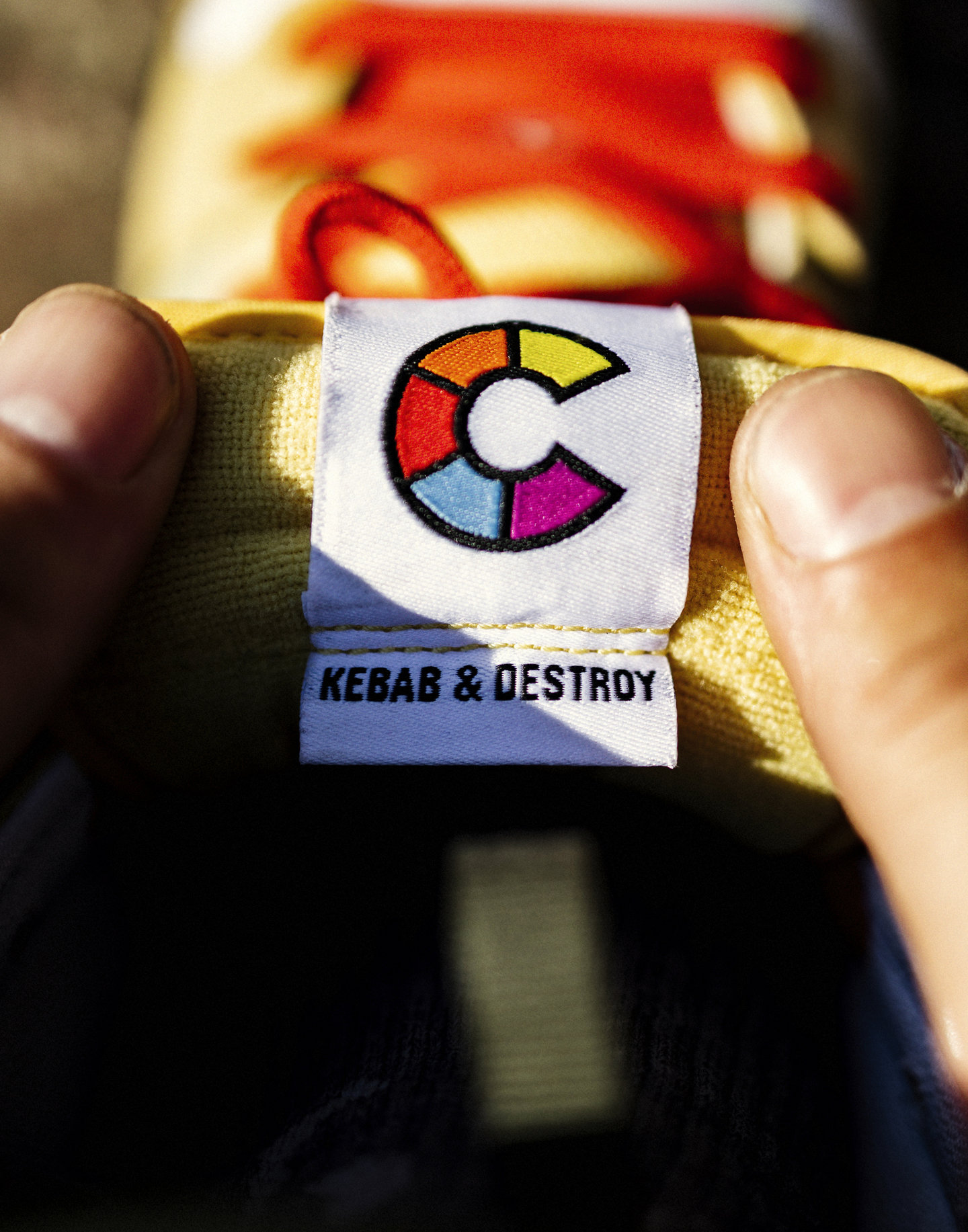 The Kebab Dunk mixes layers of color and texture that pull from a street food classic and add local flavor. 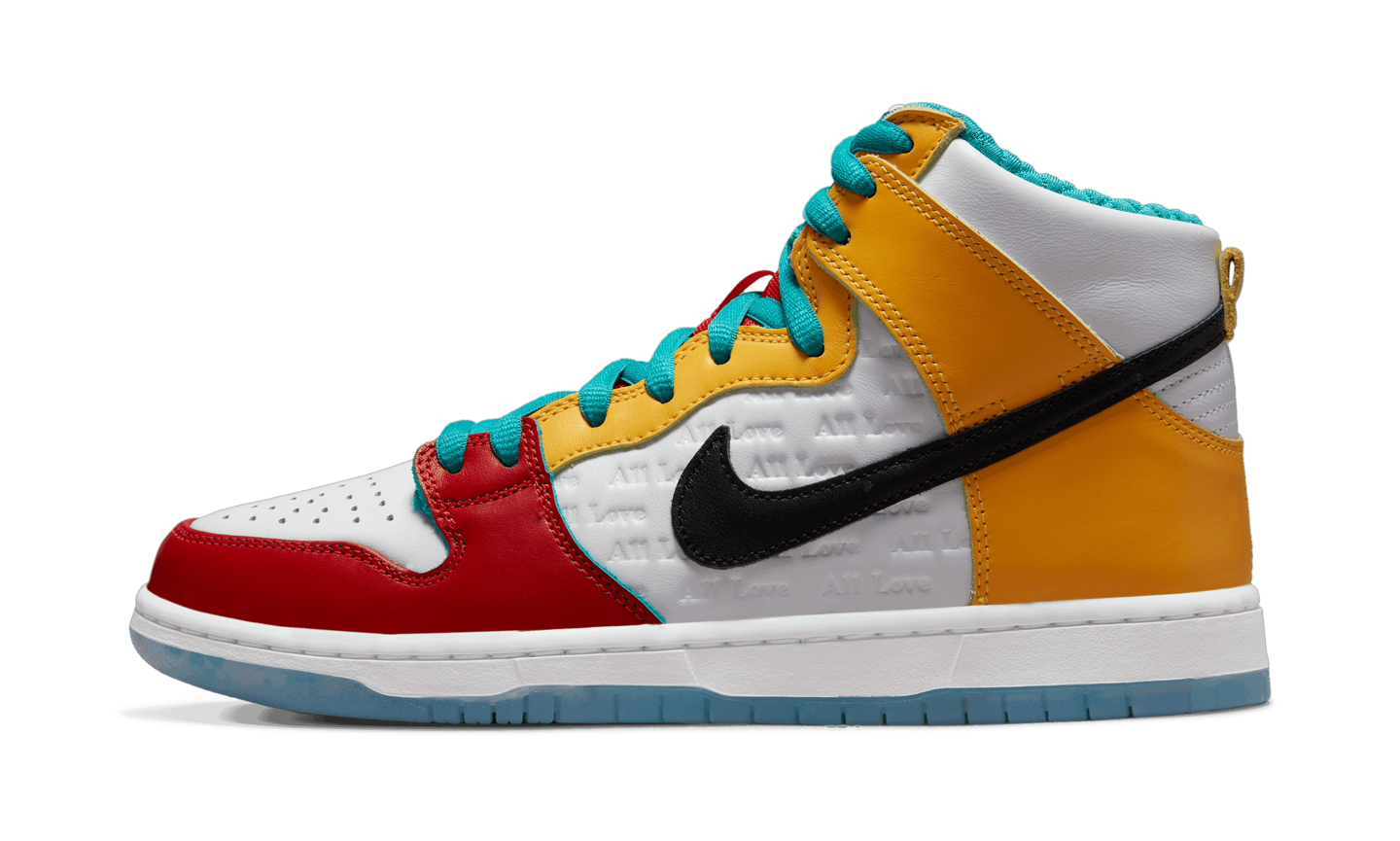 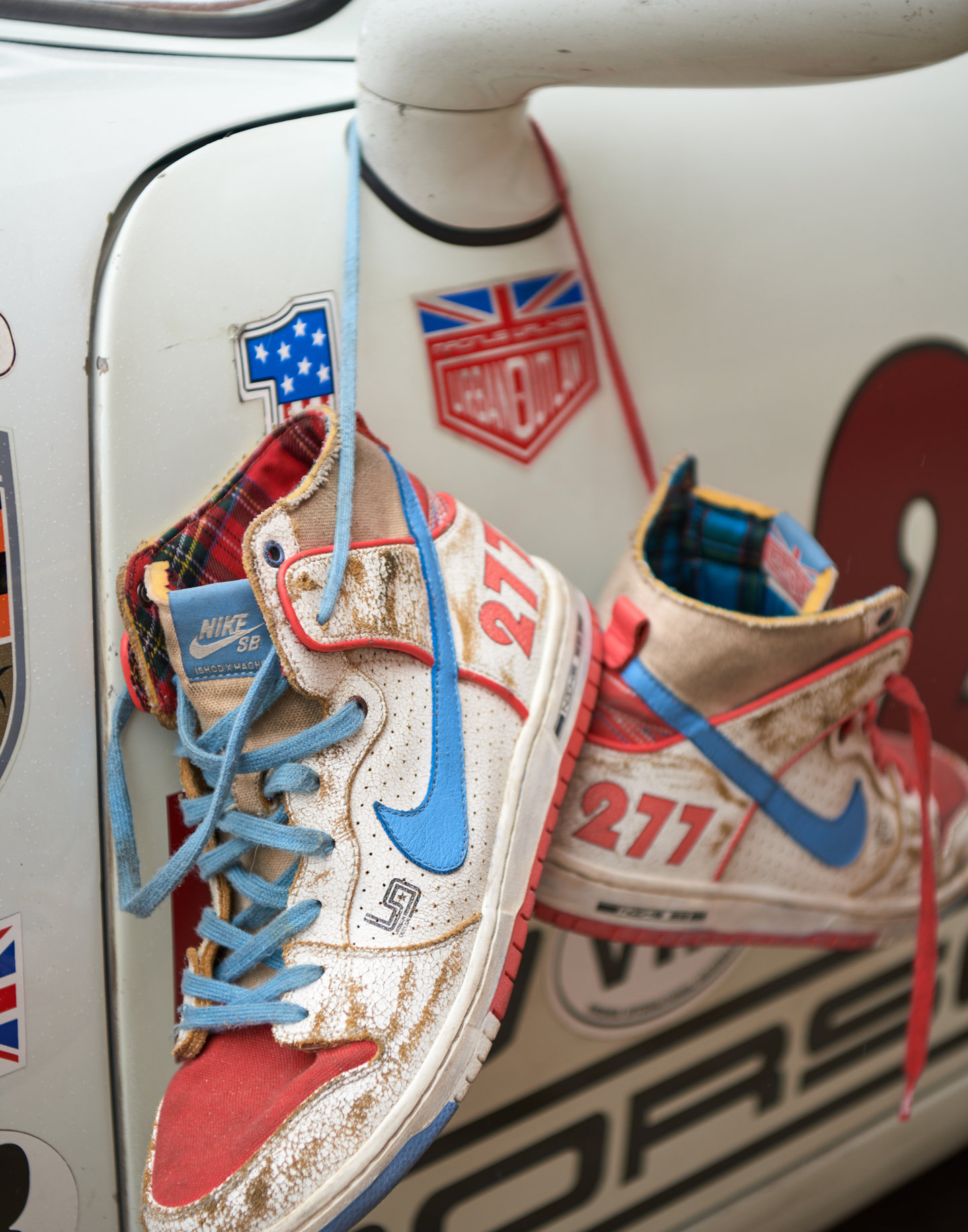 The Dunk High with outlaw racing-inspired detailing, designed to get dirty. 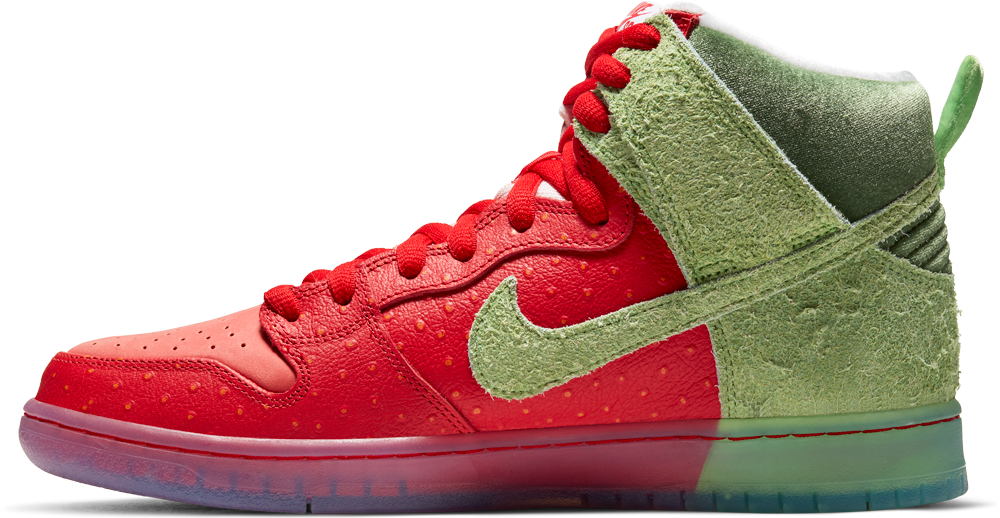