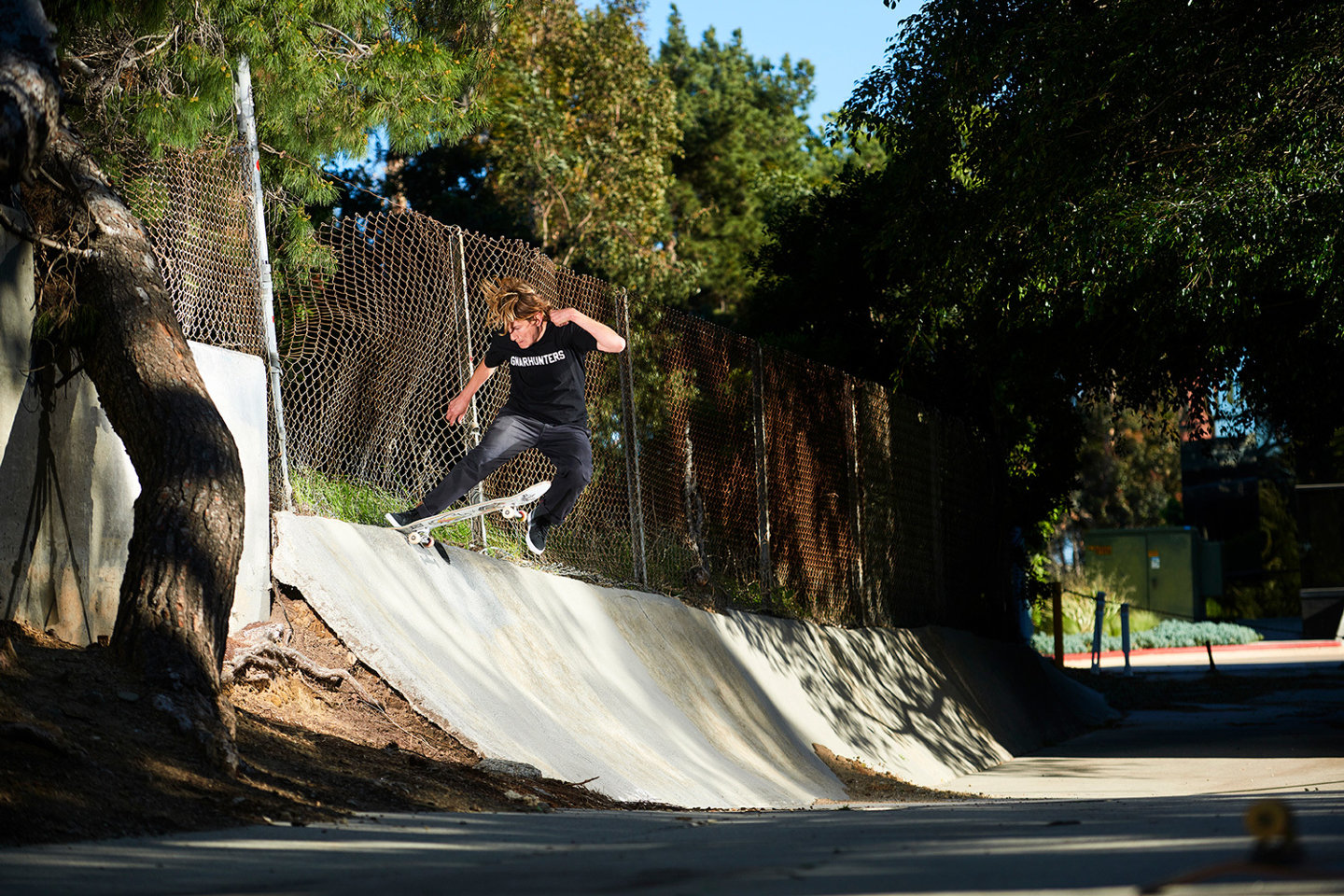 Since designing the first tee, Elissa Steamer’s skate and surf brand, Gnarhunters, has made everything from beanies to beach towels, collaborating with artists like Nat Russell and Thomas Campbell. On the heels of her feature part in Gizmo, Elissa and the team at Gnarhunters are dropping their first collab with Nike SB: the Gnarhunters Blazer Mid. We had the chance to talk with Elissa about the origins of Gnarhunters, skating the new shoe with Guy Mariano, Donovon Piscopo, and John Fitzgerald and how sometimes cheese pizza can really tie the room together.

Rad things are on the rise. 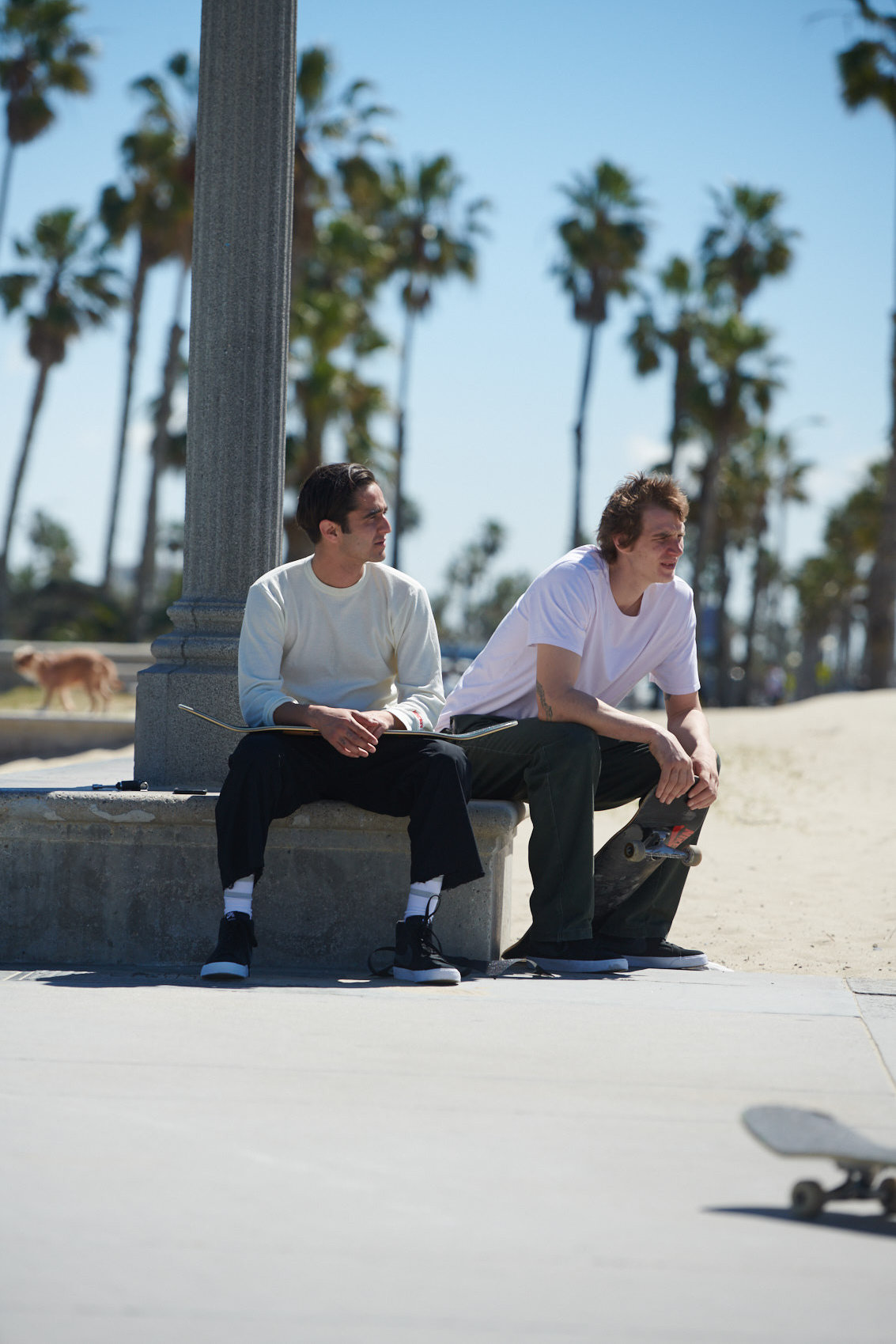 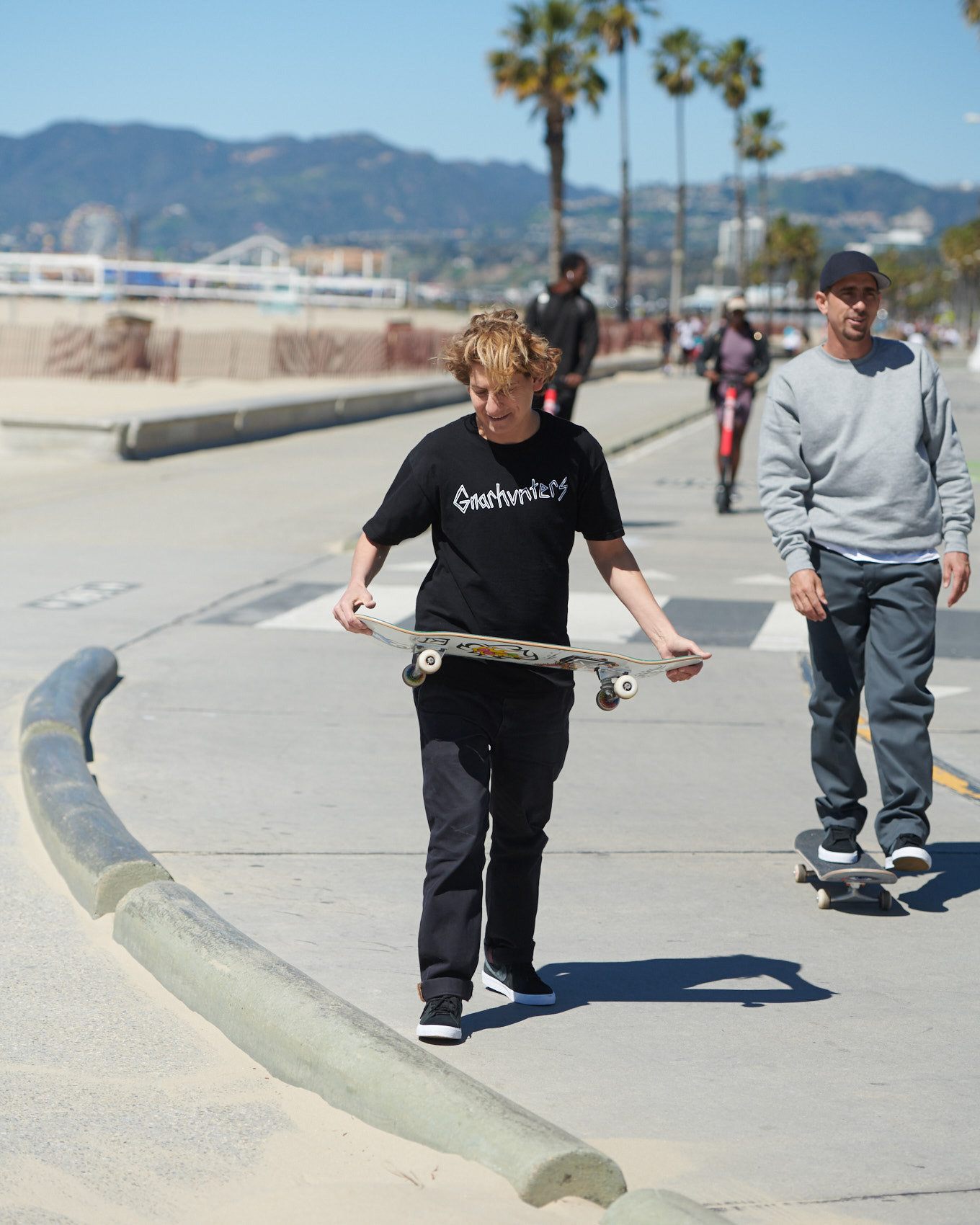 Elissa: It started when I started surfing. I saw a video where these surfers were talking about how they skated when the waves were bad - so I wanted to make a video of some surfers skating when the waves were bad with terrible surfing and also skating. My friend said we should call it “Gnarhunters 6” as if there were five videos before it. I was like, “that’s a great idea!” so we started tagging Gnarhunters on our surfboards.

Around that same time I started seeing these people who, like, I was stoked to see them with skateboards…like this 63-year-old Vietnam Vet guy named the Wolf. And then some girl in a mini skirt. Just random people like that. I started taking pictures of them and turned it into a blog and I called it Gnarhunters. The only requirement was that it had to be a real skateboard, like it couldn’t be a long board or a cruiser board.

SB: So characters you wouldn’t normally see with a real skateboard out and about?

E: Exactly. I’d see them, and I’d pull them over and ask them if I could take a picture. Once I got six or seven I made a blog. A web log. And then I started making shirts…

SB: When you first had that idea to find people who aren’t skateboarders, and you were having fun with your homie…how long was it until it became a brand?

E: Probably a few months? Maybe like six months to a year. But it was years before I actually got serious and was like, “OK, I want to do this.” 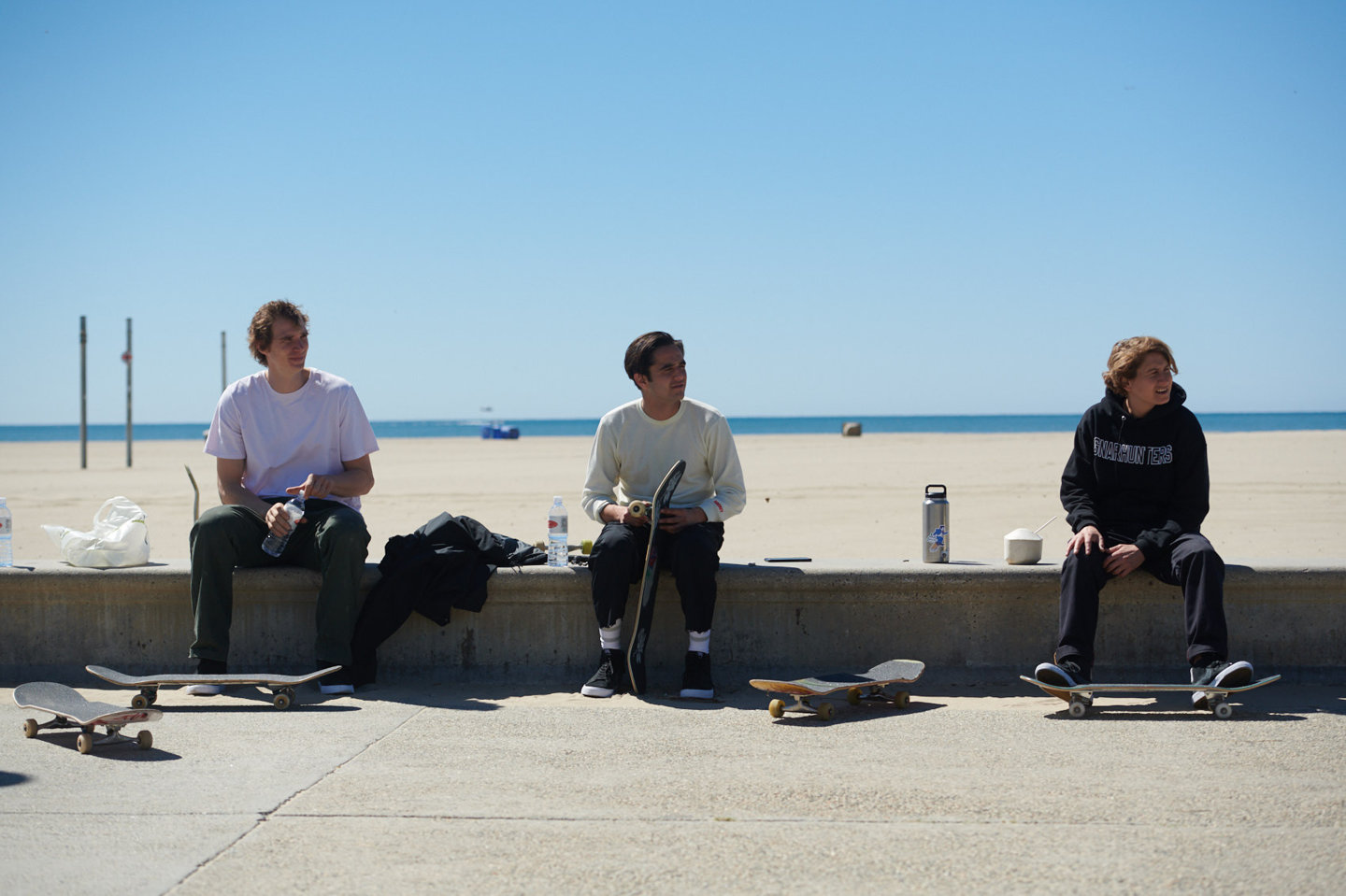 It started from a joke, like a fake surf gang...

SB: What was it like when the idea became a reality, an actual brand, and you got that first package, that first box of shirts shows up at your house and you think, “OK this is real.”

E: I actually got them printed in SF, so it wasn’t like a shipment. I met this guy who works for a friend of mine and printed shirts and he did them. We actually became really good friends through the process…but what was it like? I remember I got a box of t-shirts and sweat shirts right before Tampa Pro in like 2013 maybe? And I just packed a bunch of them and took them with me to the Tampa contest and was giving them out, but I still had no business, I was just like, “I’m going to give these out and eventually it’ll hit,” ya know? (laughs)

SB: It wasn’t some master plan to start a brand and sell shirts, it was just like, “Let’s do this.”

E: Oh yeah, no no, it just started from an idea, like a joke, because Gnarhunters is very aggressive and extreme word, ya know? So it started from a joke, like a fake surf gang, to what it is now. 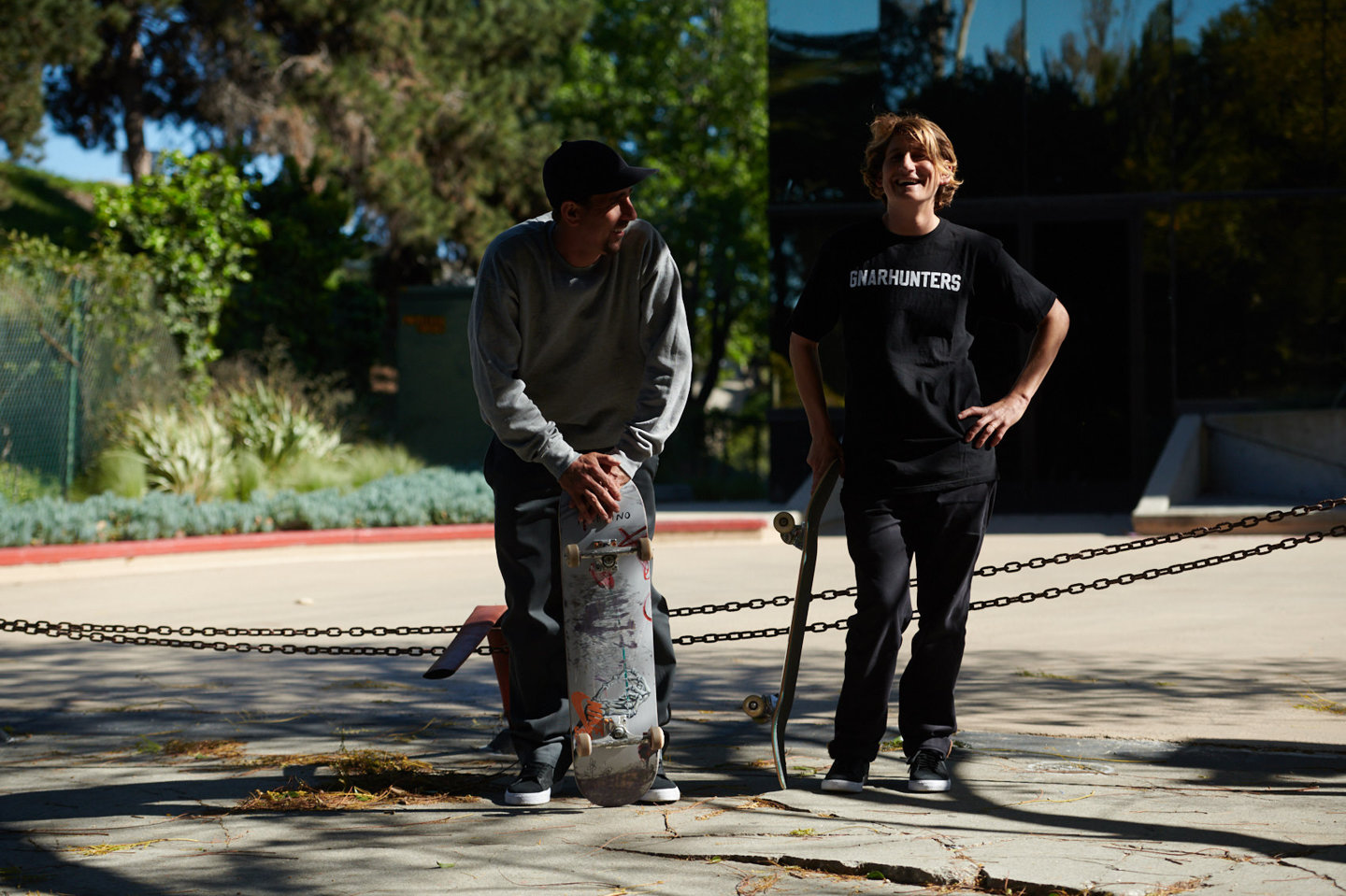 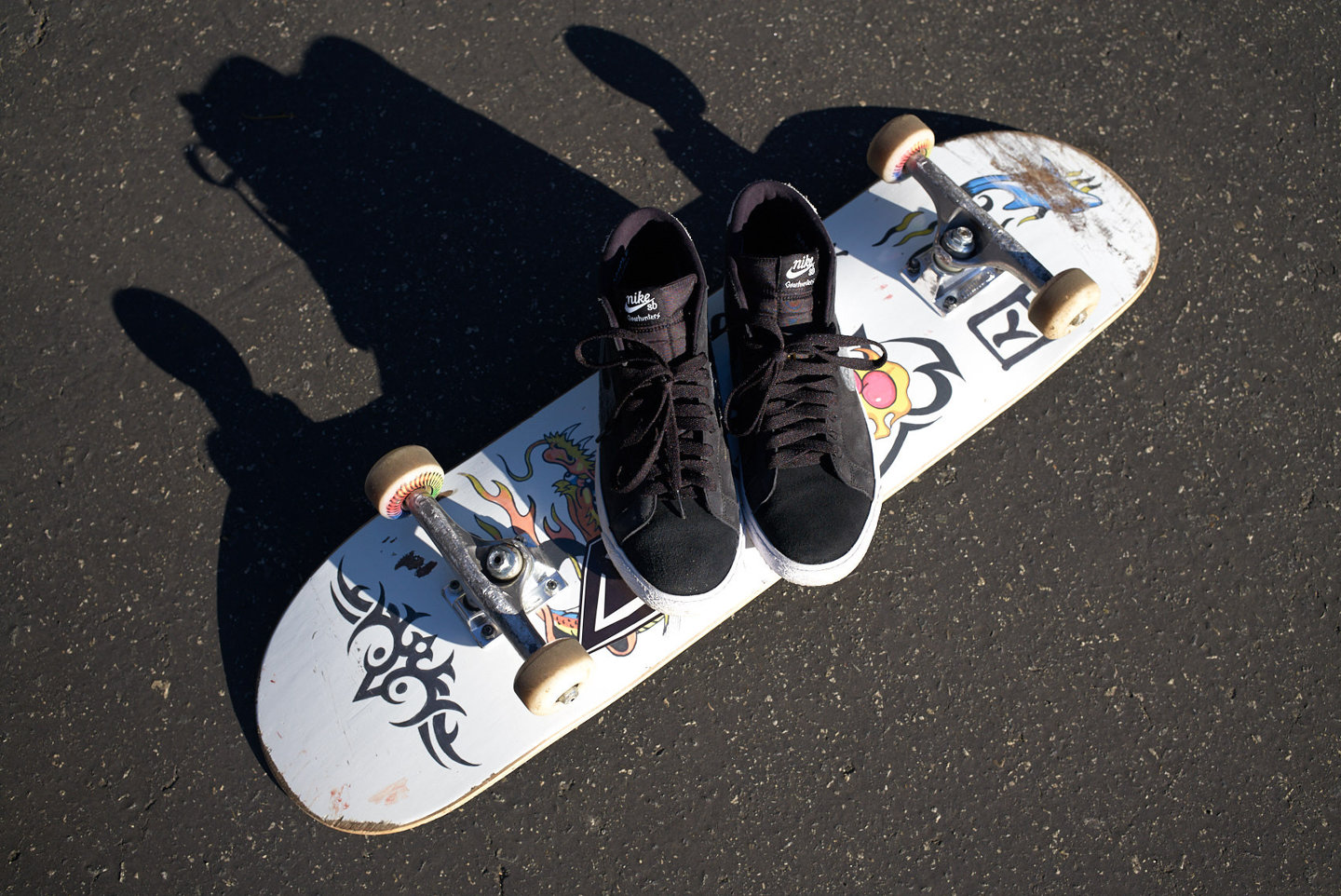 SB: Cool. What was the design process for the Blazer?

E: Well, it was super mellow, really. I kinda knew I just wanted to make a shoe something that everybody would wear…I didn’t want to make a shoe that was fuzzy with fruit on it. I thought about making it out of like, boardshorts material. Or like a wetsuit. But I didn’t want to make it corny, I just wanted people to wear it. So I just went with the black and white sole.

SB: What’s your favorite part of the shoe design?

E: Embossed Swoosh with the G logos on it.

SB: What was it like when you linked up with everybody in Santa Monica to skate? Talk a bit about that day with Donny, Guy, John Fitzgerald…seeing that crew skate your shoe.

And I love Donny, too. I’ve known Donny since he was 13 years old and we’d go on Zero tours, and he was always such a gentleman, he would never let me or Rattray—he was Rattray and I’s roommate—he would never let us sleep on the floor. He would always sleep on the floor. And he’d always make sure we took the beds, which I thought was great, even when we offered it to him.

SB: What trick did you get?

E: No comply tailslide. And then we got the best dinner! Scuba ordered the cheese pizza for the table, which really just tied the room together. What was that place called? It was a destination spot…I forgot what it was called. It was amazing, though, we shut them down… Cantalini’s in Playa Vists! It was really good

But yeah, I was amped to see it, cause it looks like such a good shoe when they were was skating it. 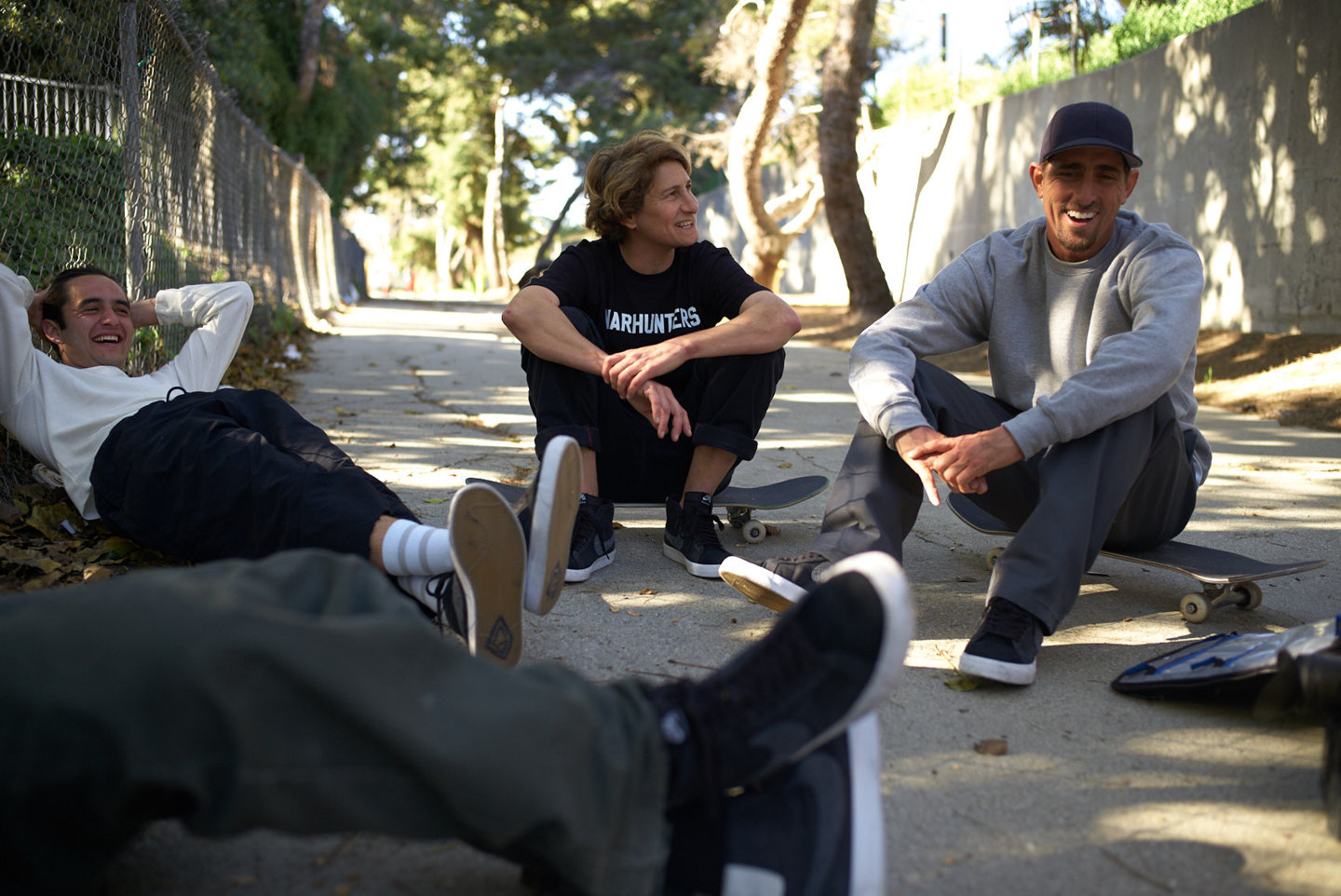 SB: So are they all on Gnarhunters now?

E: Well, I need to talk to them about it, but yeah, basically. (laughs)

SB: This one’s from Aaron Meza…where have you experienced harsher localism, skating or surfing?

E: Surfing, yeah. Skating’s not like that localized. I mean, maybe it used to be back in Meza’s day at EMB or whatever, but now it’s not like that, everybody’s inclusive, it’s rad. Surfing is heavy man. Those people will vibe you out some times.

SB: Would you ever wake up at 6AM to skate?

E: Only if I had to. But I don’t wake up to surf at 6AM, either. Maybe when I was a beginner, but I don’t set alarms anymore.

SB: What’s the earliest you’ve gotten up for surfing?

E: I’ve jumped in at first light, like before it was even light out, but that was like 10 years ago probably. 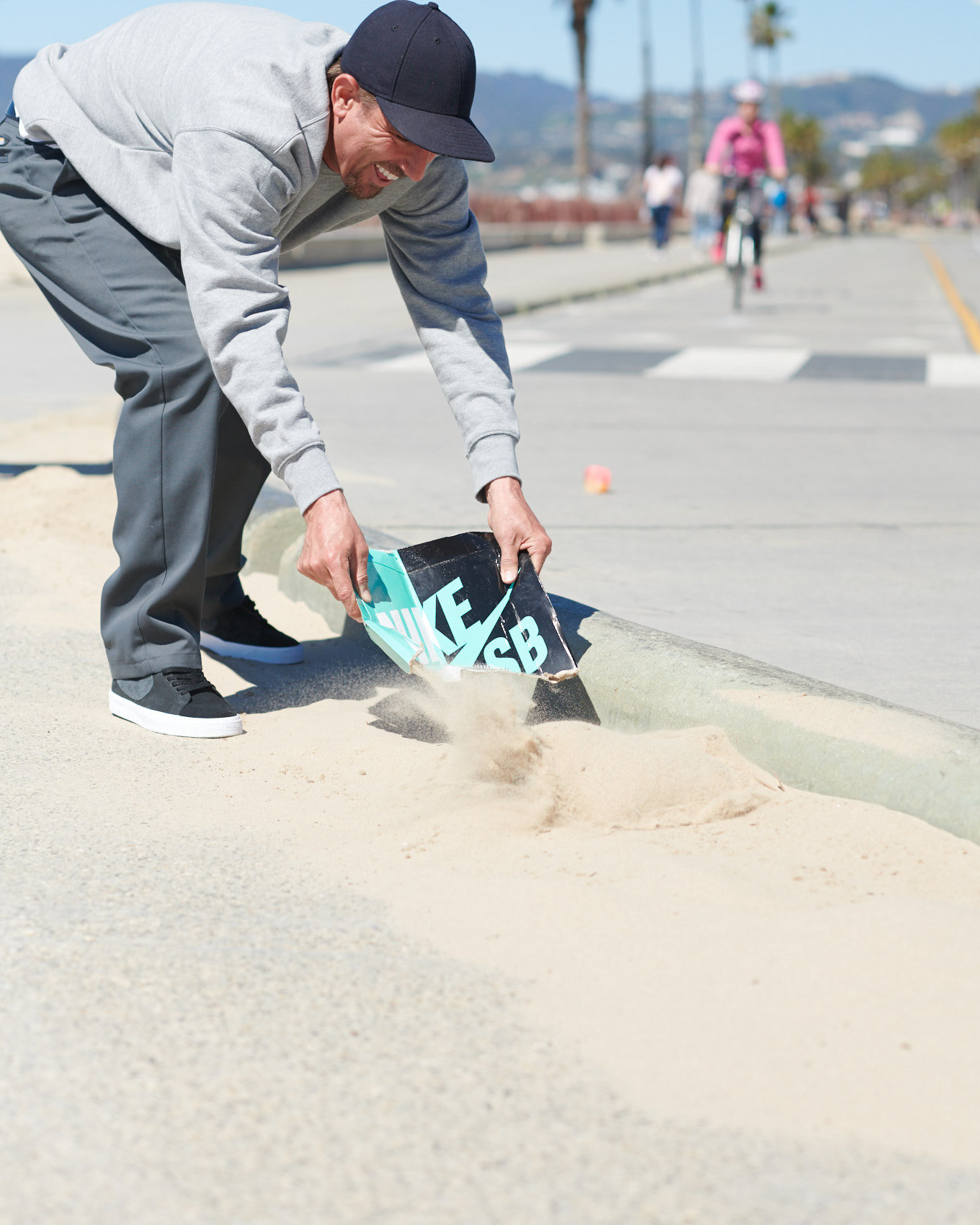 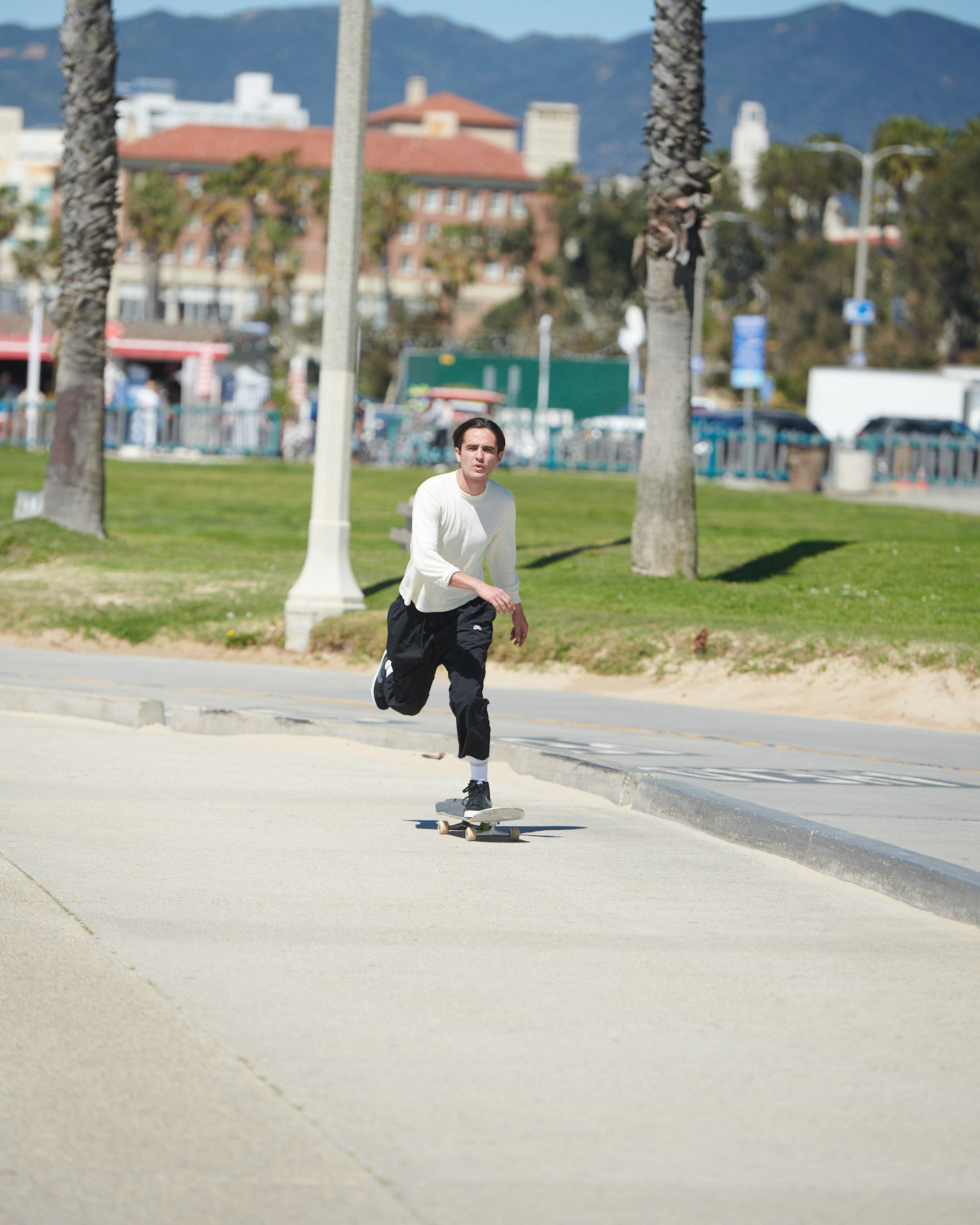 E: (laughs) I like the ones you don’t really have to slide, and you can just go straight and it’s not too fast, ya know? Just fast enough. I think, Quintara between 26th and 36th, it’s a nice ten-block run. Or Balboa’s really sweet, just at the end there towards the beach is nice.

SB: What’s next for Gnarhunters?

E: What’s next for Gnarhunters?

E: Yeaaaah… I actually don’t even know what’s next, really. Right now I’m just working on making Rob’s “Begging To Be Rad” series and some stuff with the Japanese and…but what’s next? I don’t know. I just gotta keep it going, ya know? Just persevering and doing it. Rad things are on the rise. 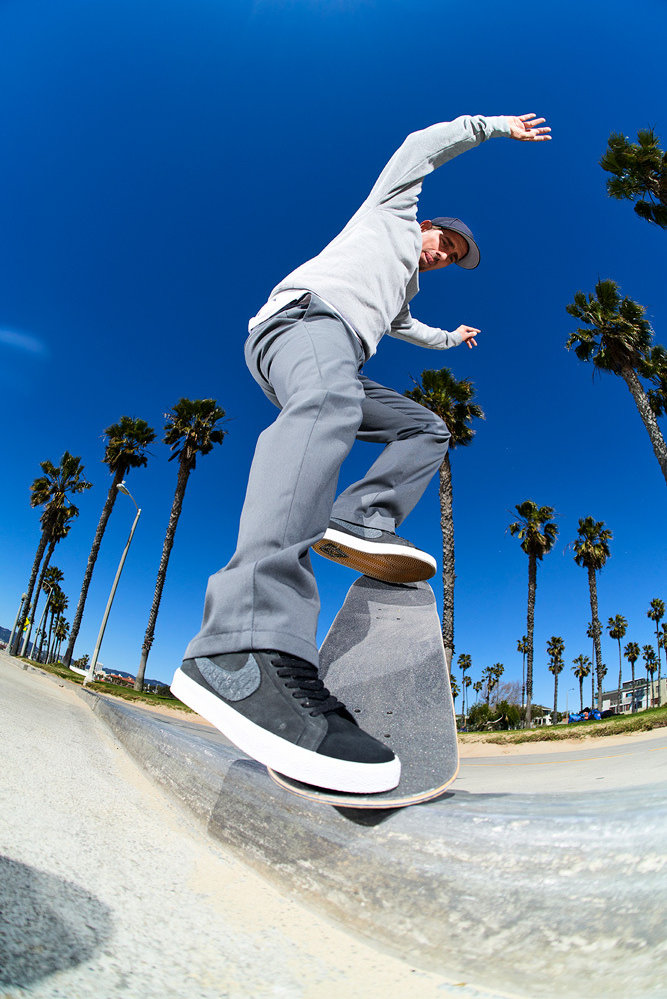 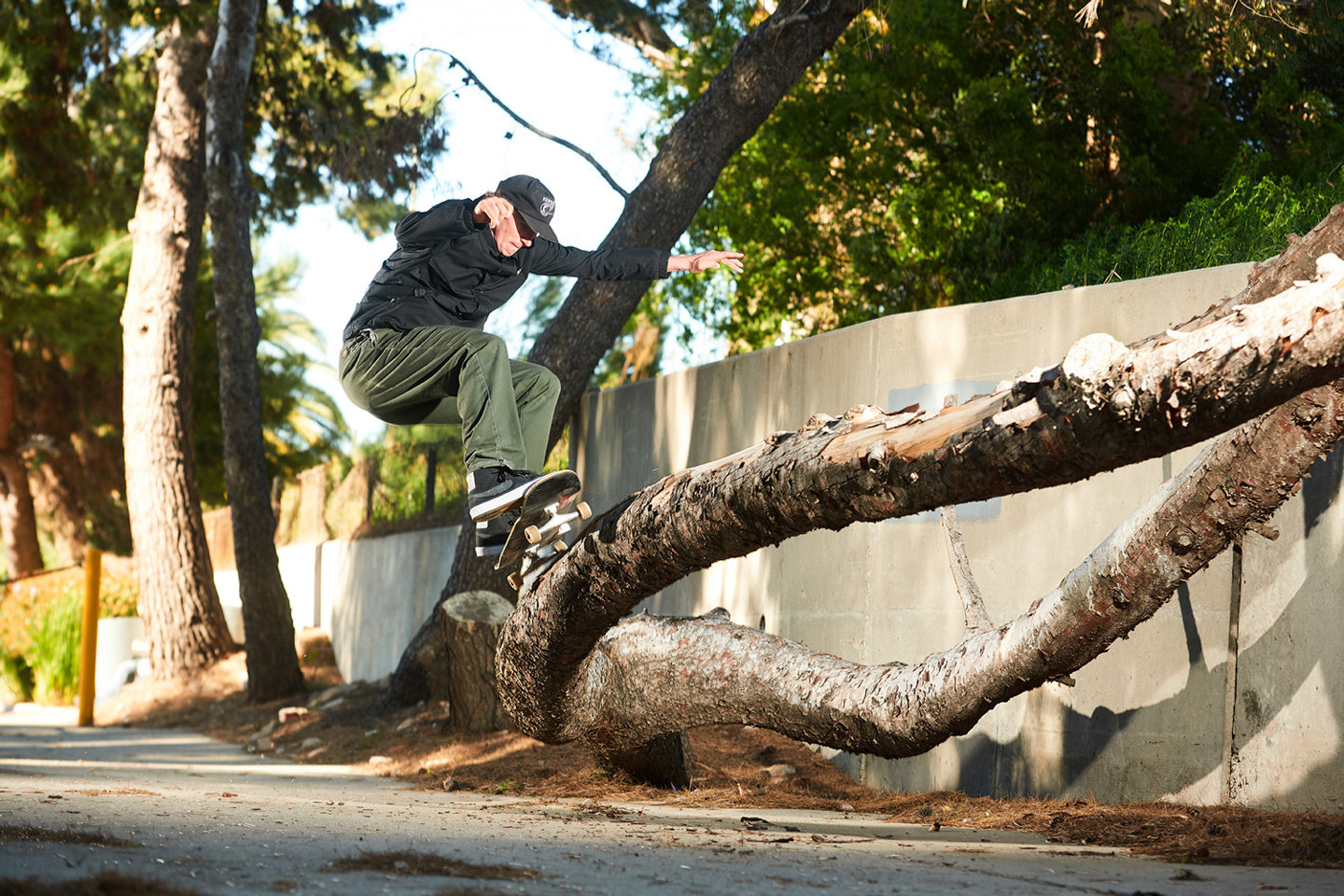 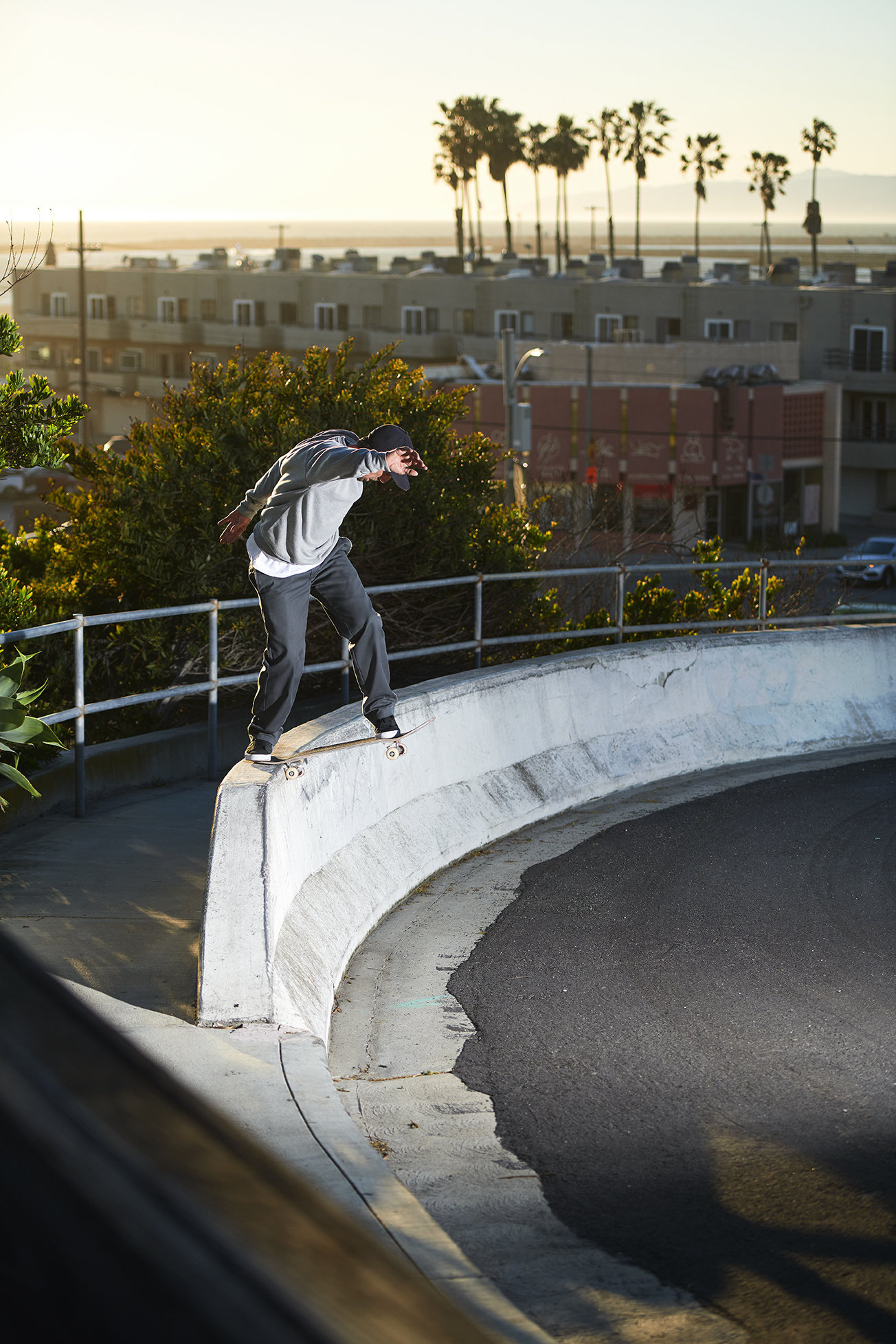 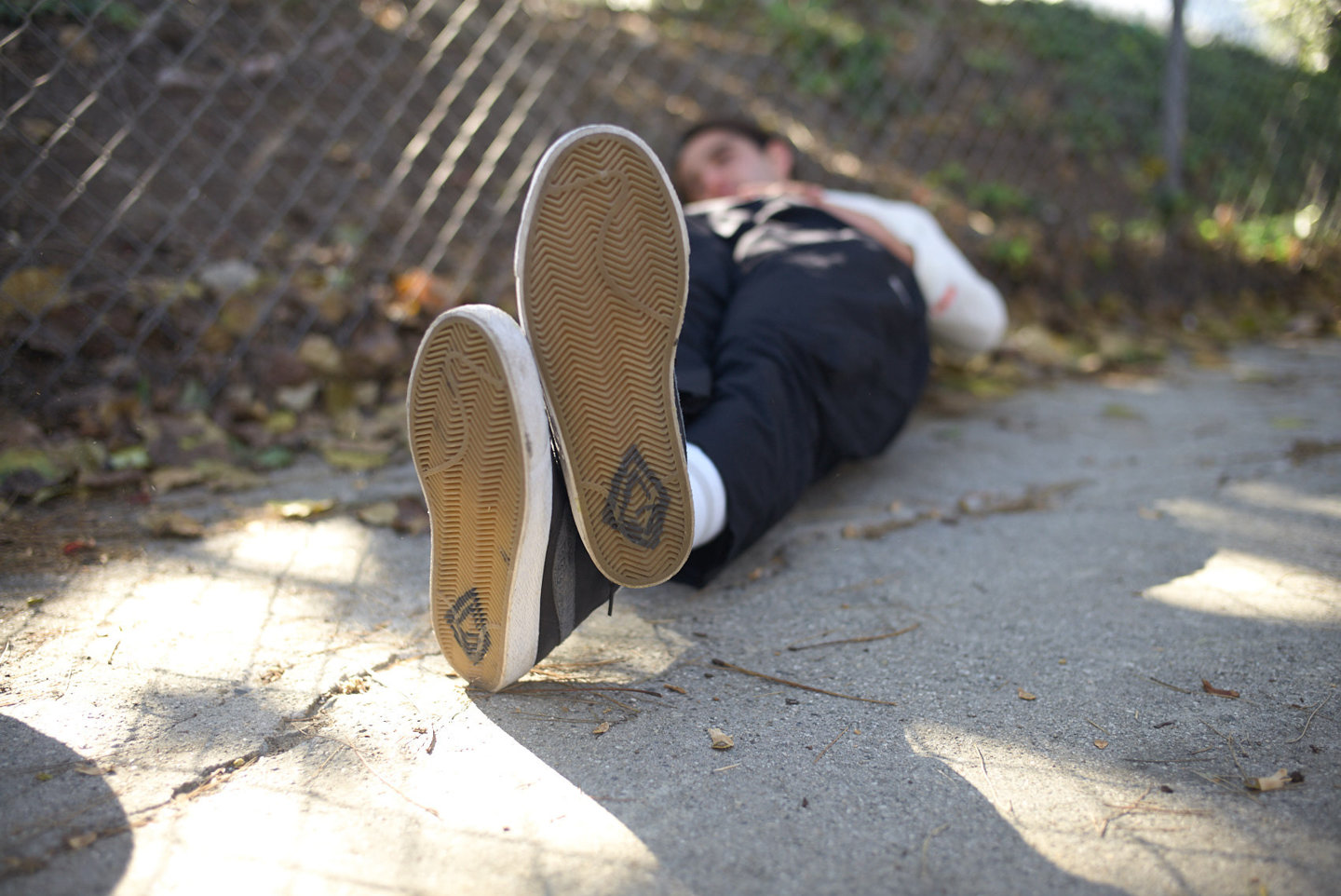 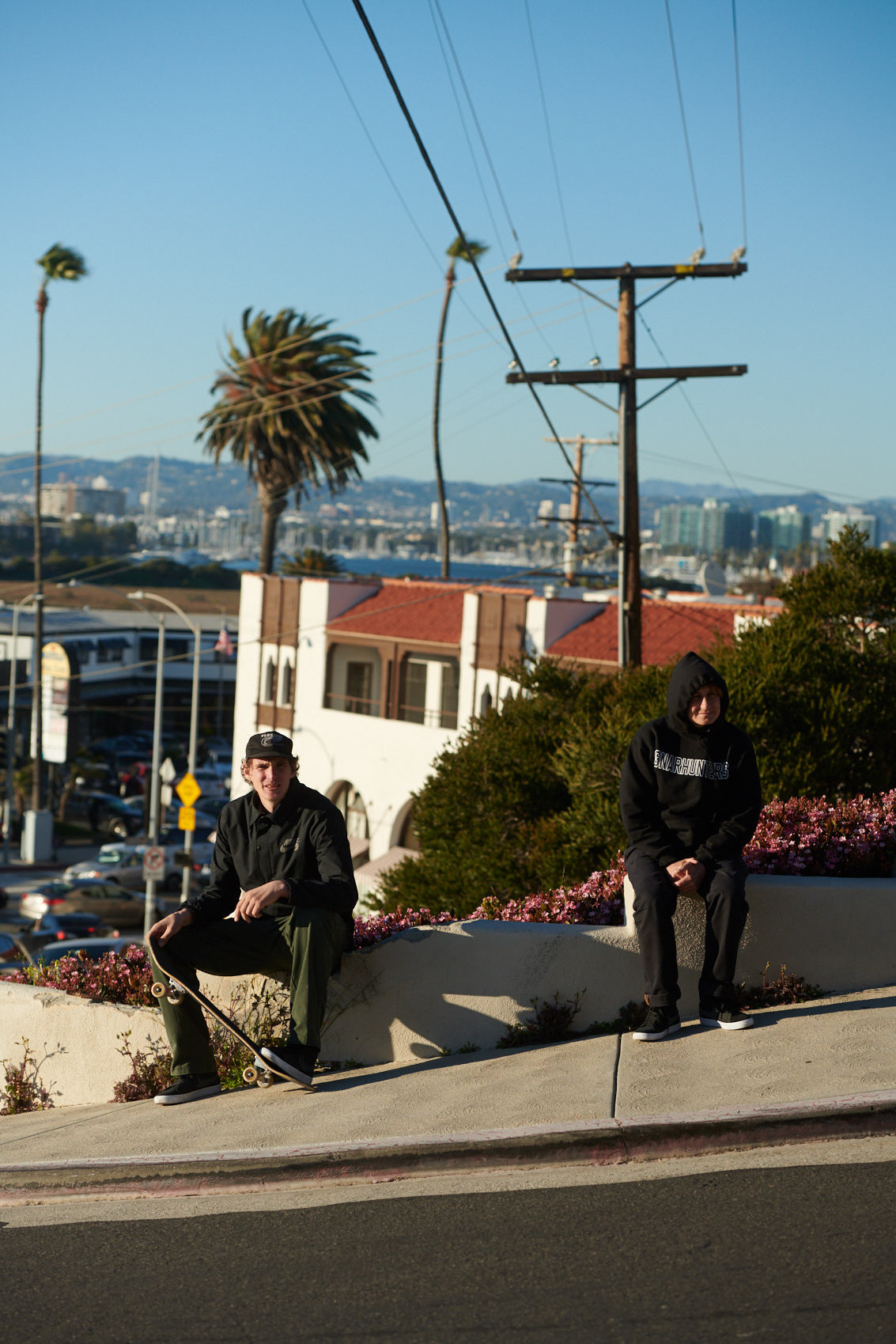 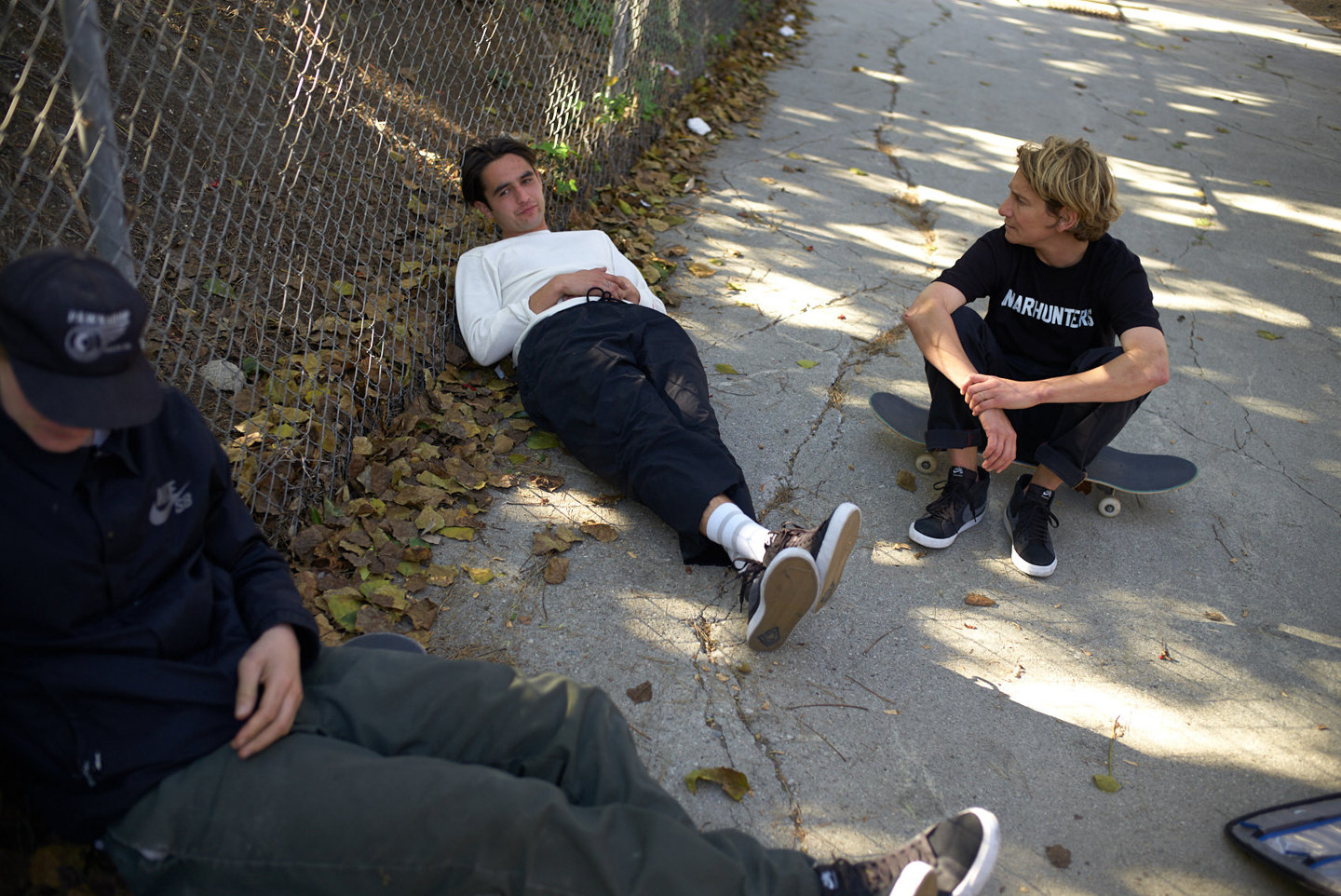 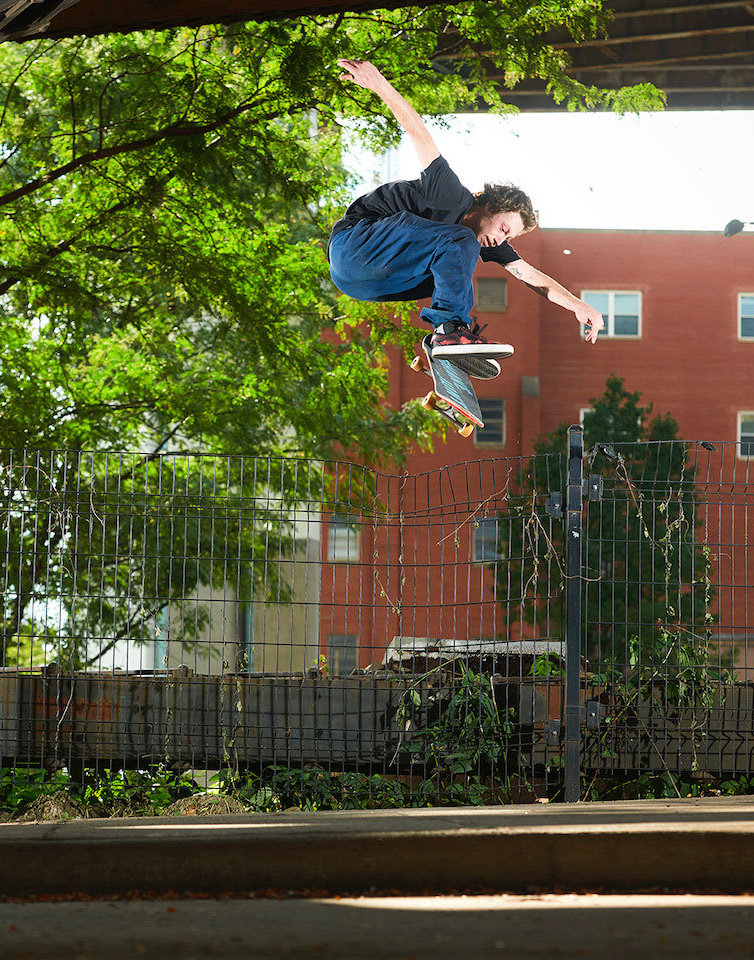 To celebrate his Thrasher part, we caught up with Jacopo and talked about his favorite skaters, what makes the Milano Centrale plaza so iconic and his favorite era of disco.

Watch and Read the Interview
Before Wheels of Fortune 2019 kicked off in Seattle, the GIZMO crew hit up Bellevue Skate Plaza. Join Elissa, Lacey, Sarah and Leticia’s session.
Full Screen 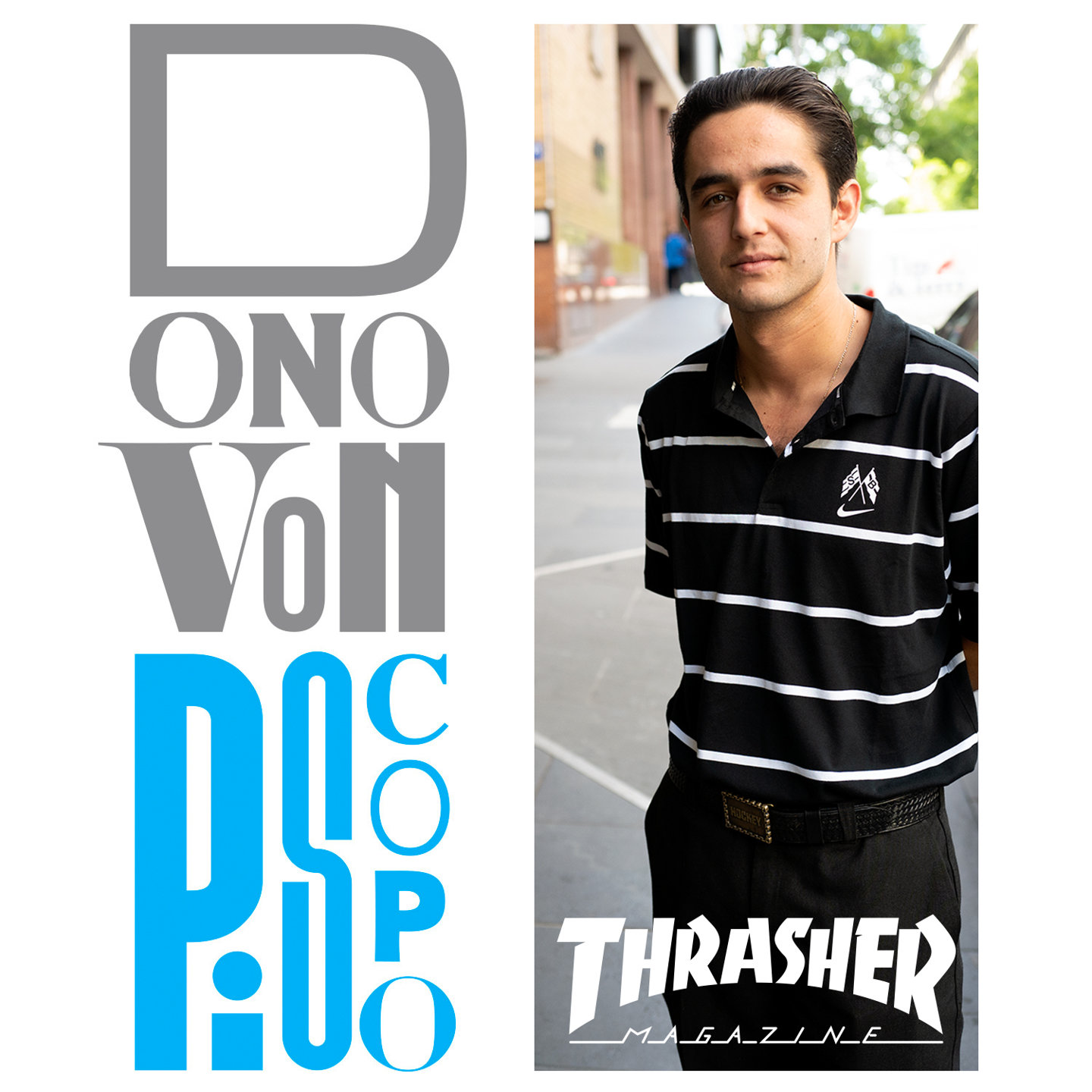 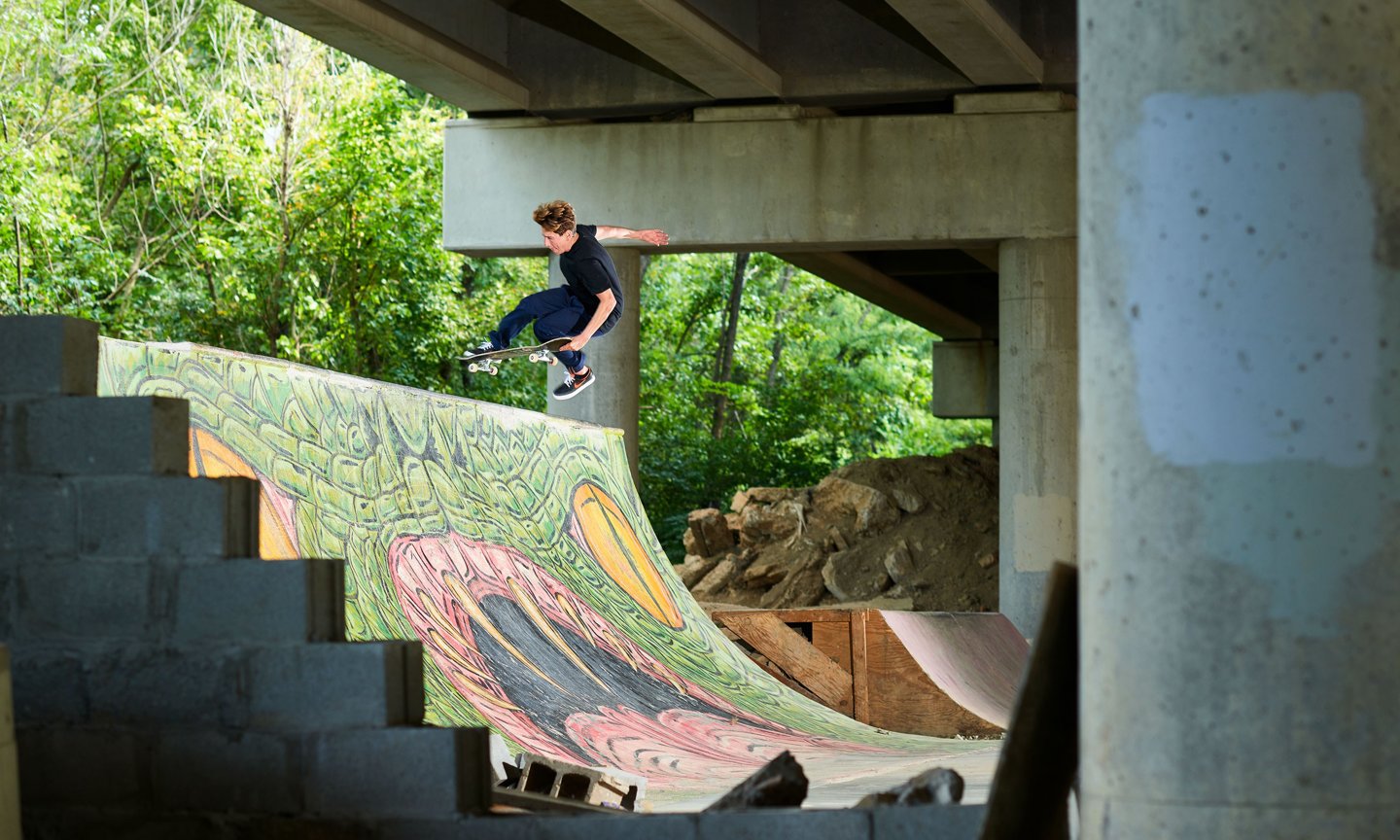